Print
HELPMANN AWARDS 2004 "...A STRONG VOICE....THIS BOY CAN REALLY SING..." SHOW MAGAZINE, NEW YORK Matt is fast becoming one of Australia's most sought after performers. Over the past 10 years his... 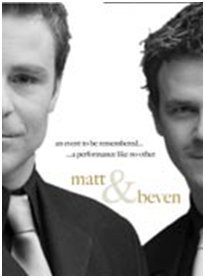 Matt Hetherington travels from VIC
Fee Range: Up to $5000


Matt was awarded the Helpmann Award as Best Lead Actor in a Musical for his performance in The Full Monty. Matt played Lieutenant Joe Cable in the Rogers & Hammerstein classic South Pacific to a sold out season and with great reviews at Melbourne's State Theatre speakers and also appeared as Berger in the 60's rock musical Hair. His performance earned him Green Room and MO Award nominations as Best Actor in a Musical. Matt graduated from the highly respected Western Australian Academy of Performing Arts (WAAPA) and has been wowing audiences for the last 15 years with his band Matt Hetherington & Beyond Belief.
Singing in front of screaming fans came easily for Beven with a musical career that commenced on national television. At the age of 11 Beven first appeared in front of the country on Channel 10's Young Talent Time in which he starred for over 6 years. No stranger to the stage, he has held lead roles in productions such as Carmen Miranda and Seven Little Australians. He has also produced, recorded and written his own music, and has been singing on the live circuit for over 10 years.
Beven has his own successful 10 piece "big" band and is in high demand on the corporate circuit. He appears regularly on Bert Newton's Good Morning Australia and is interviewed regularly by some of the countries most prominent media personalities. Rove Live's Peter Hellier, together with Melbourne's comedic trio Tripod penned a song about Beven's life which soared to No. 1 on the Triple JJJ Top 50. Always in the spotlight - Beven is a natural born entertainer with a powerful and versatle voice.
The guests have arrived........they're mingling, chatting, sipping on champagne........they eagerly await the night ahead. Finally they are seated. Entrees are served........the lights dim. It's about now that your guests embark on the night of their lives.
Beven Addinsall and Matt Hetherington know how to entertain corporate guests. With their charismatic personalities, together they showcase a production combining musical numbers, comedy and classics. These two young men, who were born to entertain, have soaring voices, magnificent harmonies and an astounding presence. Appealing to all ages, it's the ultimate show stopping feature, with two of the countries most highly regarded and respected theatrical performers.
Subscribe
© 2022 Platinum Speakers