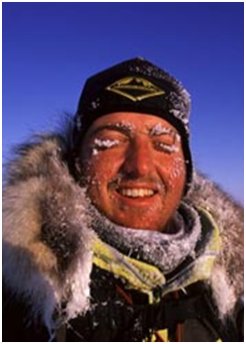 Matt McFadyen is a keynote speaker and facilitator for Peak Teams. Record-breaking polar adventurer, sailor, and inspirational speaker Matt McFadyen takes an audience on powerful leadership adventures. Using the latest in interactive technology, the audience makes critical decisions during the unique and compelling journey. Pushing toward the ends of the earth, Matt led his teams, and leads the audience through the emotional highs and lows and to the extremes of human potential.


Matt has worked with diverse global organizations to engage, align and inspire leaders and their teams. Matt has delivered over 300 presentations on 4 continents and partnered with organizations across several industries. An experienced sailor and polar adventurer, Matt has led teams to the ends of the earth and developed his own unique leadership story.
Originally from Sydney, Australia, Matt currently resides in Santa Cruz, California.
In December 2003, Matt McFadyen ‘the adventurer’ was born when, at the tender age of 22 years, he set sail for Antarctica in the company of five like-minded adventurers.
Taking a 43-foot yacht across the most dangerous ocean on earth was no easy task. Having to navigate fields of icebergs while beset by storms of mammoth intensity, Matt was forced to draw on every ounce of courage and perseverance he could muster as nature surely tested his resolve and that of his fellow adventurers.
The meticulous planning and preparatory work that had taken two years to complete paid off in January 2004 when the team reached Commonwealth Bay Antarctica. For four days the hardy adventurers explored the pristine wilderness that is Antarctica. A life changing experience for any person let alone one so young as Matt.
On the return voyage Matt McFadyen again experienced the raw force and power of nature. The small craft was pounded by a massive storm 550 nautical miles south of Tasmania. Waves of up to fifty feet high swept across the yacht knocking it over several times. The whole crew had to struggle for their life’s as the waves continued to knock the boat over. This harrowing experience and the raw power of nature inspired and motivated Matt to further adventures.
He has since become the youngest Australian to ski to the North Pole unassisted, and only the second Australian to accomplish this amazing feat three times. In his second expedition, which he completed in April 2006, he had to negotiate one of the hardest Arctic seasons in years to reach the top of the world.
In 2008 Matt McFadyen again returned to the North Pole as an expedition guide. With fellow guide Eric Philips and two others the team battled temperatures of minus 35 and incredibly difficult ice conditions throughout their entire expedition.
When not exploring the Polar Regions Matt makes his living as one of Australia’s most sought after Motivational Speakers. Matt’s presentations come complete with some of the most stunning visuals you will encounter.
His passion for life, his overall presence and above all, his unique story makes him a must see individual and speaker.

Journey to the End of the Earth
Subscribe
© 2022 Platinum Speakers