With over 30 stellar years in the food industry behind him, a plethora of awards to his name, a handful of best-selling cookbooks under his belt, and the tour de force behind some of Australia’s most celebrated dining establishments; it’s safe to say that Matt Moran is an Australian food icon. 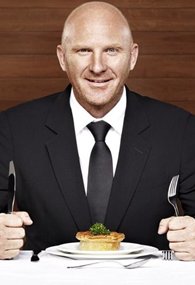 With over 30 stellar years in the food industry behind him, a plethora of awards to his name, a handful of best-selling cookbooks under his belt, and the tour de force behind some of Australia’s most celebrated dining establishments; it’s safe to say that Matt Moran is an Australian food icon.

Matt is joint owner of Solotel, one of the most diverse hospitality groups in Australia. His venues include Aria Sydney & Brisbane, Chiswick, North Bondi Fish, Chiswick at the Gallery, Paddo Inn Bar & Grill and Chophouse, to name a few. His business continues to expand with the announcement of a new restaurant at Barangaroo on Sydney’s foreshore, due to open later this year.

At the heart of every one of Matt’s endeavours lies a passion for fresh, seasonal produce. This philosophy is showcased in his award-winning contemporary Australian menus that emphasise seasonal ingredients, balanced flavours and premium-quality produce.

If it’s out of season, it’s not on the menu. Matt also loves to support inspirational local and regional producers, growers and farmers—each with their own unique stories, that he believes makes eating so much more special.

This seed was planted early for Matt, who spent his childhood on a farm, where a commitment to the land, love of food and seasonal, local produce were instilled in him.

Matt started his food career at the age of 15 as an apprentice at La Belle Helene Restaurant in Roseville, on Sydney’s North Shore. Here, he discovered the art of classical French cooking which remains the foundation of his cooking today.

Matt opened his first restaurant, The Paddington Inn Bistro, in 1991 at just 22 years old. In 1995 he opened Moran's Restaurant and Café, which was awarded best new restaurant in the Sydney Morning Herald Good Food Guide. In 1999, at the age of 30, Matt opened his iconic two-hat restaurant, Aria, in an unparalleled location on Sydney Harbour.

He continued to expand the company with the opening of Opera Bar in 2006 followed by an events and catering arm of the business that has since delivered many premium events, both private and corporate. ARIA Brisbane opened its doors in 2009, and has been awarded two coveted Chefs Hats like its Sydney sister. Chiswick in Woollahra was established in 2012 with more recent additions to his ever-expanding empire including North Bondi Fish, Chiswick at the Gallery, Chophouse and Paddo Inn Bar & Grill. The next project is set to be the most innovative venture to date, an inspirational three-storey venue opening in 2017 at the breathtaking new Barangaroo precinct.

As his business continues to grow, Matt is dedicated to developing the people at the heart of his businesses; fostering their passions, encouraging professional development and providing exceptional opportunities within the food industry.

Matt is one of Australia's most recognised, celebrated and influential chefs, having hosted prime-time shows such as Masterchef and Masterchef Junior, Heat in the Kitchen, The Chopping Block, My Restaurant Rules, The Bank, his own conceptualised award-winning TV show Paddock to Plate and The Great Australian Bake Off alongside Maggie Beer, which currently airs on Foxtel’s Lifestyle Food channel. He will also appear on Channel Nine’s Family Food Fight later this year.

Among other achievements, he is also a frequent contributor to magazines and newspapers globally and he is a member of the culinary panel for Singapore Airlines designing in-flight menus. He was also awarded GQ’s Chef of the Year in both 2012 and 2014 and has been part of the national judging panel for the coveted Delicious Produce Awards, since its inception in 2005.

Matt is also a fourth generation farmer and still owns a farm to this day. He has a true love of the land and is passionate about farming and creating exceptional produce. Moran Family Farm is located in the Central Tablelands of New South Wales, Australia and supplies premium quality lamb and beef to Matt’s restaurants.