Meshel Laurie is a stand-up comedian of over 20 years’ experience, a radio and television broadcaster, writer and corporate speaker.   Meshel is a panelist on TEN’s The Project on Friday nights and is busy hosting some of Australia's most popular podcasts including   Australian True Crime podcast with Emily Webb. 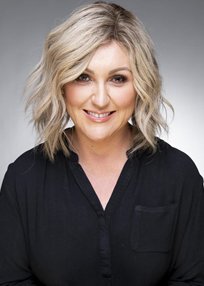 Meshel's relaxed, comedic style kept the audience very engaged. She was aware of the issues of drug addiction and had a genuine interest in the topic and helping raise awareness about the drug court program.

Meshel Laurie is a stand-up comedian of over 20 years’ experience, a radio and television broadcaster, writer and corporate speaker.

Meshel is recently known as the co-presenter of the Australian True Crime podcast with Emily Webb.

Meshel Laurie’s latest book, CSI Told You Lies is an intriguing look behind the scenes at the professionals working in homicide and victim identification and was released in 2021.

Previously co-hosting breakfast radio, the KIIS breakfast show in Melbourne with Matt Tilley until 2018, 2022 has seen both Meshel and Osher Günsberg extend their relationships with Acast. Continuing as part of the Acast Creator Network, their podcasts have become some of the most listened-to and loved podcasts in Australia. Her chart-topping podcasts Australian True Crime, Calm Ya Farm, and Meanagers joined the Acast Creator Network in 2020, with Australian True Crime recently celebrating over 50 million downloads alone.

Meshel is a panelist on TEN’s The Project on Friday nights. Other television credits include hosting ABC’s Stand Up!, co-hosting Ten’s This Week Live and regular guest appearances on shows such as Rove Live, The Glass House, Can of Worms, Spicks and Specks, Good News Week, The Circle and Adam Hills: In Gordon Street Tonight.

In 2013 Meshel released her first book, a memoir titled The Fence-Painting Fortnight of Destiny. A bit of a memoir and an insider’s perspective on the 1990s comedy scene, the workings of an inner-city brothel, what it’s like to be ‘the girl on Rove’ and also how fence-painting can help save a life. Meshel released her second book, Buddhism For Breakups, in February 2017. It follows Meshel's personal story and how Buddhism can be a roadmap for navigating the fear, loneliness and grief of a broken heart. Later this year Meshel will release her third book, Buddhism For The Unbelievably Busy.

Meshel regularly writes columns and articles for The Age and Sydney Morning Herald. She presents the Nitty Gritty Committee podcast, where she chats with former prison inmates, the homeless, transgender activists, homicide cops, famous people and non-famous (but amazing) people. Meshel’s Australian True Crime podcast with Emily Webb – a podcast where they speak to victims, family members, investigators and perpetrators to unearth the true stories behind Australia's most chilling, gruesome and infamous crimes.

Meshel is proudly an official ambassador for His Holiness the 14th Dalai Lama in Australia, and for Reconciliation Australia.