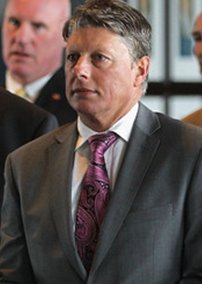 Michael Roberts travels from VIC
Fee Range: Up to $5000


Michael played for St Kilda, Richmond and Fitzroy between 1978 and 1987 and also represented Victoria against Western Australia in State of Origin football in 1981.

Combining his football career with 10 years of modelling, including 6 years on “Sale of the Century”, Michael then went on to commence a sports media career in 1988 at Channel Seven (HSV 7). As a sports journalist, producer and presenter, Michael covered numerous events, but is best known for his work on AFL Football, the Australian Open tennis telecasts and key stories for “Sportsworld”.

1993 saw Michael join Channel Nine (GTV 9) as a sports journalist for the top rating “National Nine News”. Feature stories followed for None’s “Wide World of Sports”, reports for “The Sunday Footy Show” and he hosted his own live sports show “Sports Scene” at Crown Casino. Michael also covered the Olympic Games in Sydney, the Commonwealth Games in Kuala Lumpur and Melbourne and the Asian Games in Doha, Qatar.

Michael has now branched out to write and produce documentaries including “100 Years of Australian Exploration of the Antarctic “(2007) followed by several unique stories on Australia from 2008 to 2010. Both series appeared on Channel 10 and the Discovery International and Australian channels. He has also completed a stint on “Coxy’s Big Break” on Channel 7.

In 2002, Michael was appointed host of Nine’s NRL Rugby League coverage in Melbourne, headed the Surf Titles from Bells Beach, Torquay and the National Surf Lifesaving Championships from NSW and Queensland, before moving to the AFL Football team as a panelist and boundary rider, combining this role with the Triple M Radio football live broadcast line-up.

Michael now works with former St Kilda FC teammate Danny Frawley (CEO) of the AFL Coaches Association and maintains a keen interest in a number of wine labels in the Barossa Valley linked with distributors Get Wines direct. He has also recently returned from the United States following an involvement in the Superbowl in Indianapolis and if that weren’t enough, he is a founding member and president of the Crux club, a major contributor to the Challenge Foundation for children with caner and the Trevor Barker Foundation, a position he has held for over 20 years.

He is also enormously proud to hold ambassador roles with the Alannah Madeline Foundation and E.J. Whitten Foundation, Mercedes Benz Melbourne, Jayco, Melbourne Storm NRL and the Foster’s Group. His hobbies include travelling, cycling (he heads the high profile Jayco Flyers cycling team to raise money for several charities), golf and anything involving surf and snow.