Print
One of the modern champions of Australian Football after having an outstanding playing career with the Brisbane Lions, Michael Voss went on to become a senior coach, media personality and Senior Assistant at the Port Adelaide Football Club.  In 2022 he was appointed senior Coach of the Carlton Football Club. 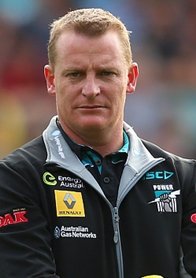 Michael is so much more than an AFL great; with his appeal stretching well beyond your traditional AFL audience it made him an easy choice as a keynote speaker for our state conference. Michael was able to engage a diversified audience and keep them entertained and inspired for the full 60 minutes, his honest and natural style was a refreshing change. I look forward to the opportunity when we can engage Michael again.

Michael addressed a meeting of a large and diverse group of professionals on high performance team culture, drawing on his personal experience, in a practical and humorous way. The feedback was universally complimentary (even from those who had said "Michael who" initially!) He demonstrated his ability to communicate with a wide range of people in a subsequent meeting with our senior group in which he focused on more specific aspects of performance especially in the area of people management and business development, answering questions on many aspects of these topics. I highly commend him as a practical motivational speaker, generous with his time and with a genuine desire and enthusiasm to deliver.

Excellent, the audience couldn't stop talking about him

Michael Voss travels from VIC
Fee Range: Up to $5000

One of the modern champions of Australian Football after having an outstanding playing career with the Brisbane Lions, Michael Voss went on to become a senior coach, media personality and Senior Assistant at the Port Adelaide Football Club.  In 2022 he was appointed senior Coach of the Carlton Football Club.

Vossy has, arguably, the most distinguished career of any player in the post-1989 AFL era.

Drafted to the Brisbane Bears in 1992, he would forge a career as one of the league's exceptional midfielders.

He won the Brownlow Medal in 1996 - the Bears' final year - and would become the inaugural captain of the Brisbane Lions following the merger of the Bears and Fitzroy at the end of 1996.

Vossy quickly built an enviable list of achievements, most notably his leadership of the Lions to three consecutive premierships in 2001, 2002 and 2003, and four grand final appearances in total.

Following his retirement in 2006, Vossy has established extensive experience in media and coaching. His transition to coaching started at AFL-AIS Academy before succeeding Leigh Matthews as the Lions senior coach.

He spent 2014 as the expert coach on FOX8's 'The Recruit' before he would join Port Adelaide as its midfield manager and has since taken a Senior Assistant role at the club working closely with Ken Hinkley at Port Adelaide prior to being awarded the head coaching position at Carlton Football Club in 2022.

Michael has a tremendous insight into building and leading performance.  His passion is leading teams and creating an environment that develops resilience, connection and capability in your people.

Resilience and Leading through complexity - The importance of developing resilience and a situational mindset.

The Power of Connection - Energise people, establish a more powerful connection and deeper relationship with your people.

The Performance playground - Trust in performance - Establish an environment of creativity and innovation and develop communication and coaching skills to increase engagement within your team.