Print
Mick Malthouse understands the importance of resilience, leadership and team building: stay positive, work smart and work hard, and others will follow. He is a brilliant speaker and is regularly engaged to share his knowledge and experience in the corporate arena. 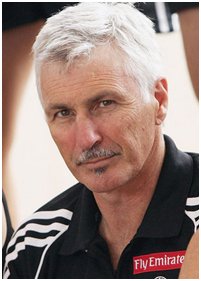 “Excellent.  Mick Malthouse was the Keynote Speaker at our recent Hotel Industry Conference. Our audience was composed of 200 hoteliers; most of whom have seen a large number of prominent sportspeople speak at various other functions. Nonetheless, hotels and sport go hand in hand, and the feedback we have received on Mick Malthouse has been outstanding. Mick may not come across as a ‘professional speaker’, but therein lays his appeal. He was extremely natural and engaging. I am sure that I speak for all present when I say that his session was not only very interesting and informative; his messages were simple, thought provoking and motivational. My only regret is that we couldn’t let him speak for longer than an hour!”

“Well thought out & delivered presentations – answered the brief and more”

A 2010 Premiership following 2 Grand Finals proved an extremely successful and satisfying year for Mick Malthouse and the Collingwood Football Club. Mick is also available to make your event or conference a success when providing a motivational presentation or leadership workshop for your organisation.

Born to Marie and Raymond Malthouse on August 17, 1953 in Ballarat, Michael Malthouse began his football career at Wendouree West, then North Ballarat. Could anyone then have predicted the football journey he would embark on?

In 1972 Malthouse was zoned to and taken by St Kilda, playing 3 finals in his debut season. He played 53 games for the Saints before being told by then-coach Allan Jeans that he would struggle to get a game in the senior side due to an abundance of similar-sized players.

He left for Richmond half way through the 1976 season and never looked back. Michael and Nanette (who were married in 1974) had their first daughter Christi at the end of 1976, followed by Danielle two years later. The 1980 Richmond Premiership win over Collingwood was one of six finals Malthouse played for the Tigers in 121 senior games. As the 'backline captain' he was noted for being a tough and solid defender, and a promising leader. He retired in 1983 due to injury.

But there was no stepping away from the game he loved. Malthouse was appointed senior coach of Footscray in 1984 (currently the only coach to move straight from playing to a senior coaching role.) By now Michael and Nanette had welcomed Cain as the first boy to the family. Troy was born after the family's first season at the Western Oval. In the years from '84 to 1989 Malthouse impressed with his dedication and professionalism and was known for his tough stance on many players.

In 1990 Malthouse moved his family from Melbourne to Perth to coach the West Coast Eagles. The move would be a huge success. In 10 years with the club he took the Eagles to the finals every year, in 1992 and 1994 going all the way to a premiership.

2010 was Malthouse's 11th season at the helm at Collingwood, after being appointed senior coach in 2000. This year saw his seventh finals campaign with the Magpies, including the 2002 and 2003 grand finals.

Malthouse was appointed Carlton Coach for the 2013 AFL Season where he coached for two and a half years prior to his retirement. Mick's coaching career spanned 718 senior games – the all-time VFL/AFL record – over thirty-one seasons. Malthouse was involved as a player or senior coach at six clubs - an AFL record.

2016 saw Mick Head Coach of Fox Footy’s Reality Television Program, The Recruit and with SEN as a Radio Commentator.

Mick Malthouse understands the importance of resilience, leadership and team building: stay positive, work smart and work hard, and others will follow. He is a brilliant speaker and is regularly engaged to share his knowledge and experience in the corporate arena.

Resilience & the importance of positivity