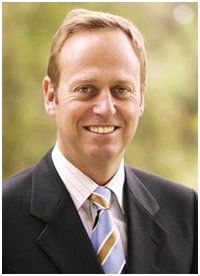 Mike Smithson travels from SA
Fee Range: Up to $5000

Mike Smithson is a political reporter and presenter for Seven News in Adelaide, South Australia, Australia.
He has been a political reporter for Channel 7 News for the past 12 years. He also writes a weekly analysis column for the Sunday Mail newspaper and appears every Friday on ABC radio’s popular ‘spin cycle’ segment.
Mike has also been a 7 Network foreign correspondent covering the hotspots of Europe, a news presenter and was also awarded South Australia’s Journalist of the Year 2006.
With a grasp of all topical issues affecting South Australia and the nation, he provides entertaining and thought provoking presentations on everything from the behind-the-scenes workings of Government, to issues such as the nuclear energy debate and climate change.
He likes to leave his audience pondering the future direction of this great state and puts forward some controversial views about the economy and those who control it.
Some of his biggest reporting stories have included the infamous Skase Chase, the 2000 Summer Olympics and the War on Terror in Afghanistan.
In 2007, Mike Smithson won 3 awards at the SA Media Awards: the inaugural award for Commentary, Analysis, Opinion & Critique for his work with the Sunday Mail, Best TV news report and the prestigious title of Journalist of the Year.
Mike has a warm and witty style as a speaker or MC which wins over audiences.
Subscribe
© 2022 Platinum Speakers