Popular personality Nick Giannopoulos has been bracing us with his quick humour and high energy for years.  Known for his roles in Wog Boys and TV show Acropolis Now, Nick is a highly successful comedian, event host, actor and writer. 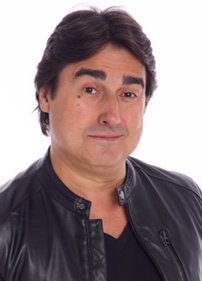 Popular personality Nick Giannopoulos has been bracing us with his quick humour and high energy for years.  Known for his roles in Wog Boys and TV show Acropolis Now, Nick is a highly successful comedian, actor and writer.

Nick is one of a few performers who have easily transitioned from stage to television to film while being incredibly successful in all genres.

After graduating from Rusden College and Victorian College of the Arts, Nick co-wrote and co-devised the stage production Wogs Out of Work which he then toured to huge success around Australia for three years from 1987-1990.

Nick's first television project was Acropolis Now, which he co-devised and developed. He also wrote 20 full episodes of the smash hit series which ran for five seasons over two and a half years on the Seven Network.

In 1992, Nick he co-wrote and co-directed a one woman show with Mary Coustas, Waiting For Effie, a sell-out for eight months nationally.

Following the conclusion of Acropolis Now, Nick returned to his first love of the stage and opened the Melbourne International Comedy Festival in 1993 with Wogarama, which went on to tour the country for two years. He followed this with Wogboys, which he wrote, directed and produced himself. Wogboys also toured for two massive years.

Nick has won two MO Awards for best comedy performer, the New York Media Award and was awarded the Comedy Star of the Year for his performance in The Wog Boy.

In 2000, Nick's first feature film was released and immediately broke Australian box office records. The Wog Boy took the highest opening weekend box office of any Australian film in history at its time of release.

The film won Nick Comedy Star of the Year at the 55th Australian Movie Convention and he also secured his second Mo Award for Best Comedy Performer.  The Wannabes was Nick's second film, which premiered in 2003.

His third film The Kings Of Mykonos: Wogboy 2 was shot in Greece in 2009 and was a box office hit here in Australia and in Greece, where it went to number one in its opening week.

In 2014 Nick reprised the stage production Wogboys which sold out around the country. Wogs At Work was launched in 2017 and toured nationally.

Throughout his career Nick has performed the role of MC/Host at numerous functions and for many corporations, where his energy, adaptability and comedic expertise ensure the event will be memorable.