Print
Pat Farmer has transformed his interest of ultra-marathon running into a professional career – setting and breaking world records at events globally, while simultaneously raising funds for charities and medical research programs. In January... 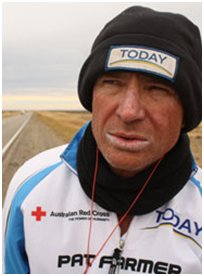 Pat Farmer has transformed his interest of ultra-marathon running into a professional career – setting and breaking world records at events globally, while simultaneously raising funds for charities and medical research programs. In January 2012, Australia's Pat Farmer accomplished one of the greatest feats in human history. He'd arrived at the South Pole after the longest and arguably most dangerous run ever made, a physical and mental triumph that put him in the company of the world’s greatest adventurers - Sir Edmund Hillary, Robert Falcon Scott and Thor Heyerdahl.


Pat Farmer has a global reputation for ultra distance running as well as raising enormous funds for various charities. He established the fastest Around Australia record of continuous running over 14,662.4km during his Centenary of Federation Run that began and ended in Canberra. He retains the record for crossing the Simpson Desert and he set the vertical run record, the equivalent of running up Mount Everest in 24-hours. Pat Farmer has run across the United States of America twice.
A patriotic Australian, Pat Farmer dedicates much of his public life to charity and has raised over $4 million for charities. A high profile leader, acknowledged for an enviable media following, positive “brand” awareness, and the influence to unite and inspire action for a vision or solution. Pat spent nine years as a successful federal politician, supported by an internationally renowned athletic career that transitioned into motivational / inspirational public speaking engagements.
Raised brand awareness for sport and sponsors, gaining a reputation for entertaining addresses; with his trademark combination of enthusiasm, drive and commitment. His open communicative leadership style creates a team vision of growth, harmony and a culture of success.

Pat Farmer's 21,000-kilometre Pole to Pole Run, dedicated to raising funds for the Red Cross, began at the North Pole in April 2011 and took him through Canada, the United States, Central America and South America to his ultimate destination in the Antarctic, the South Pole. He ran an incredible average of 65 kilometres every day, some days running up to 100 kilometres or more. The epic trek saw Pat brave blizzards, nearly lose his life when he became lost in the blazing deserts of Peru, and evade polar bears, snakes, crocodiles, armed bandits and rogue militias. He defied unimaginable pain, suffered dehydration and stress injuries and destroyed his feet.

Unbelievably, he set a new running record for the South Pole, while being blasted by ferocious winds and -40-degree temperatures. Pat Farmer's diary chronicles the highs and lows of an extreme athlete, and reveals how he kept going through some of the most inhospitable places on earth. Whether you run or not, his account is sure to inspire, amaze and motivate.


Pat Farmer featured in This is Your Life and in his own book Running on a Dream. In addition he was the subject of a documentary which focused on his Federation Run around Australia. Pat Farmer prides himself on being an 'average' Australian, albeit one who pursues exceptional challenges. Pat has a tremendous story to share about his “dash” as well as conveying the message of not allowing any obstacle to get in the way of your dreams. 'Congratualtions to Pat Farmer who was recently named Australian Geographic Adventurer of the Year 2012'
Subscribe
© 2022 Platinum Speakers