Print
Since joining Channel Seven News in Brisbane back in 1975, presenter Pat Welsh has become one of Australia’s top sports journalists, commentators and more recently, sports editors.Best known for his rugby league and golfing... 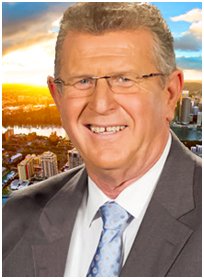 Since joining Channel Seven News in Brisbane back in 1975, presenter Pat Welsh has become one of Australia’s top sports journalists, commentators and more recently, sports editors.


Best known for his rugby league and golfing commentary, Pat has travelled extensively throughout Europe, Australia, the United Kingdom and United States for the Seven Network. He has covered several Kangaroo tours and the 1992 Rugby League World Cup as well as State of Origins.

Pat is a familiar face at golfing tournaments across Australia, where he has earned the nickname "Whispering" Pat Welsh for his hushed, on-course commentary. His commitment to that sport has seen Pat cover the prestigious US Open and British Open golf tournaments and the President's Cup for Channel Seven.

This remarkable sports journalist and presenter mixes with some of the biggest names in sport in the world and has many stories to tell. He keeps audiences enthralled with his stories and insights of what it like to be part of some of the biggest sporting events in Australia and the world. His passion and knowledge on his topic leaves his audiences wanting more.

Pat can tailor his presentation to be sport specific eg just on golf or the Olympic Games or just let you sit back and enjoy "The Storybook of Sport".
Subscribe
© 2022 Platinum Speakers