Print
Paul McNamee speaks about his keys to success developed during 11 years touring the world as a top ranked tennis player and 21 years creating and developing some of Australia's biggest sporting events and organisations. Former Australian... 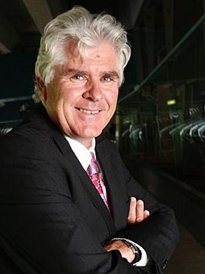 I wanted to thank you very much for your extremely interesting and entertaining presentation at KPMG's Australian Open Lunch. The feedback received from all our attendees - KPMG partners and their guests alike - was that your analysis of the current state of Australian tennis and the Australian Open was intelligent and thought-provoking. As well, the 'war stories' of your career in tennis and sports generally were insightful and entertaining. Thank you once again for an excellent presentation.
KPMG

He carries the entrepreneurial spirit very close to his heart; he is a risk taker, an advocate for constant change, an all-round nice guy, philanthropist, a visionary.
Wealth Creator Magazine


The only professional to have changed from a one-handed to a two-handed backhand mid-career, Paul was also a member of the Australian Davis Cup Team which won the Davis Cup in 1983 and 1986, and the only player to take a set off McEnroe throughout the entire 1984 Wimbledon Championships when he won the third set of their first round match.

As co-founder of the Hopman Cup, Paul helped turn the tournament into a prestigious international event. He held the positions of Tournament Director, Head of Marketing and CEO with the Australian Open until 1996 and is credited with invigorating the competition, positioning it as the Grand Slam of Asia/Pacific and instigating the night final: the highest rating program in Australian television history. From 2006 to 2008, Paul was the Tournament Director for Golf Australia of the Australian Golf Open, helping to raise the profile of national golf championships, particularly the Women's Australian Open.

Paul coaches the Taiwanese player Su-wei Hse, winner of the 2013 Wimbledon women's doubles, and is a professorial fellow at Monash University. In 1986 he was made Member of the Order of Australia, in 1987 awarded with the Warren Kennedy Memorial Award for Sportsmanship and named King of Moomba, and in 1996 the recipient of the Distinguished Alumni Award from Monash University. His autobiography Game Changer was released in November 2013.

Paul McNamee carries the entrepreneurial spirit very close to his heart; he is a risk taker, an advocate for constant change, an all-round nice guy, philanthropist, a visionary. Presenting in a relaxed conversational manner, Paul provides his audience with an intimate insight into his life as a top sportsman and world-class sports administrator. He speaks about his keys to success developed during 12 years touring the world as a professional tennis player and 25 years creating and developing some of Australia’s biggest sporting events and organisations.

From corporate days and conferences to intimate executive lunches, Paul’s passionate presentation will leave the audience motivated by stories form on and off the court which they can apply to variety of roles and situations.


'If you can meet with triumph and disaster and treat those two impostors just the same': Dealing with success and failure
Creating Australia's biggest sporting event
Insights from the locker room
Investing in sport as a business opportunity
What business can learn from elite professional sport
Subscribe
© 2022 Platinum Speakers