Print
Paul ‘The Chief' Harragon is one of rugby league’s modern day legends. Born and bred in the Hunter, The Chief was an original member of the Newcastle Knights Football Club and a panelist on the Nine Network’s The Footy Show. 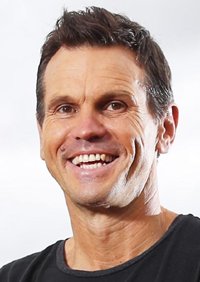 Paul ‘The Chief’ Harragon is a legend of rugby league. He was an original member of the Newcastle Knights Football Club and a panelist on Channel Nine’s The Footy Show. Born and raised in the Hunter, his 205 club games included: 169 for the Newcastle Knights, 20 New South Wales State of Origin games, and 17 Tests for Australia.

The Chief played the game of Rugby League with Passion and Intensity in a career which spanned over a decade with many accolades and achievements at the highest Escalon.  From his beloved Newcastle Knights to the State of Origin through to the green and gold of Australia the chief was a true leader of men whose playing style was indicative of his hometown and his own beliefs.

Paul’s transition from the Football Field into the world of Media and Promotions was a natural next step, his style and character caught the imagination and respect of people and audiences throughout the country. His roles included Co-Host of the Footy Show, Rugby League Commentator with the Nine Network and Fox Sports, he also wrote newspaper columns and hosted a variety of radio Shows, a top selling autobiography and national top 10 Aria single.

Another natural transition post his rugby league career was the role of representative and Brand Ambassador for many great Australian Companies. Some of these Ambassador Roles have spanned over decades and this success has been a testimony to the standing and appeal that Paul attracts in the greater community.

Paul Harragon has won numerous awards and recognitions throughout his career including winning the 1997 Ken Stephen Memorial Award for citizenship and services to the game and receiving an OAM at the 2000 Australia Day Awards. In 2002 he was inducted into the New South Wales Hall of Fame. In 2003, Paul received the NSW Children’s Week Award in 2003 in recognition for outstanding service to children.

The Chief shares real life stories featuring the stars of the game in real life situations playing the greatest game of all. You’ll learn why the best are the best, some great corporate parallels about leadership and teamwork, the importance of maintaining personal integrity despite the rules of the battle and some amazing behind the scenes stories.