Print
Peter Davidson is an inspirational speaker.  As a paramedic aboard a rescue helicopter, Peter  shares an incredible story of rescue that saved the lives of over 50 men. 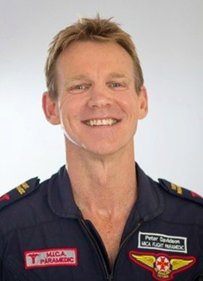 A storm was brewing but no-one knew how bad it would be.

Peter Davidson is a humble but remarkable Australian. On December 26th 1998, 114 yachts left Sydney harbour in the annual Sydney to Hobart Yacht Race, yet only 44 finished. Of the remaining vessels, 12 yachts were abandoned, 5 yachts sank, 6 men lost their lives and over 50 yachtsmen had to be winched to safety. The event is recognised as one of the worst Maritime disasters in Australian history.

Peter Davidson was a paramedic aboard the first rescue helicopter to reach the yacht “Standaside.” Eight men needed to be rescued.

The weather was described by many of the survivors and rescuers as “a Hurricane.” Waves were over 25 metres high and winds gusting at over 120 km/hr. These were the conditions into which Peter was winched to conduct the most testing rescue of his career.

This is a powerful and moving story of showing the best of what ordinary, well-trained and motivated people can achieve.

Peter shares this incredible story in which he himself almost lost his life twice. The gripping, real-life drama tested the entire crew of Helimed One and stands testament to achieving under extreme circumstances.

For over 16 years, Peter Davidson has been employed by the RAV (Rural Ambulance Victoria), and for over 12 of those years he has been aboard Helimed One, the Victorian Air Ambulance Rescue Helicopter. Peter is a qualified Air Ambulance M.I.C.A., Flight Paramedic and Team Leader.

The crew has been recognised nationally and internationally for their bravery, skill and dedication, but as Peter relates, “Awards and recognition are great, but nothing was better than the smiles on the faces of the survivors and their families.”