Print
Peter Kuruvita is an award winning chef and restaurateur.  Also known in media, Peter’s TV series My Sri Lanka and Island Feast were a huge success. Peter is engaging and lively as he shares his passion and love of cooking through expo’s, cooking demonstrations and appearances. 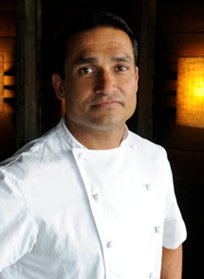 After establishing himself as a well-known chef in Australia and cooking around the globe, Peter opened Sydney’s award-winningFlying Fish Restaurant & Barin 2004, and successfully led the kitchen team as Executive Chef for 8 years. Today his legacy still lives on through its’ creative modern dishes with a strong seafood focus and great reputation.


Peter Kuruvita began his love affair with food and passion for cooking in the traditional kitchen of his ancestral home in Colombo, Sri Lanka.

In May 2013, Peter brought his signature style and focus on local seafood to the famous foodie holiday strip, iconic Hastings St, Noosa, Australia. Noosa Beach House, in partnership with Sheraton Noosa Resort, has a relaxed holiday vibe in the open terrace and bar and evolves into a stylish restaurant and cocktail bar as the day progresses.

June 2014 saw an extension of Peter’s Flying Fish brand in the Pacific with the opening of Flying Fish, Tokoriki located at Sheraton Resort and Spa, Tokoriki Island, Fiji. Set on a beautiful tropical island in the idyllic Mamanuca group, the restaurant, bar and deck overlook the beach and surrounding islands. Peter’s signature style with fresh seafood and local produce has another stunning home.

MEDIA:
Memories of an idyllic childhood spent in Sri Lanka, inspired his first cook book “Serendip – My Sri Lankan Kitchen”. The book takes food lovers on a journey through the kitchen experiences of his childhood with traditional recipes and stunning photography.

This was followed by Peter’s first TV series “My Sri Lanka with Peter Kuruvita” which combines breath-taking scenery with spectacular spicy fare as Peter travels across the country, experiencing the wealth of Sri Lanka’s beauty, culture and culinary diversity.

“My Sri Lanka” was nominated for the 'The Rockies' Banff World Media Awards 2012’ and Peter nominated for an Australian ‘Logies 2012 Award’ in the “Best New Male Talent” category. The series is now airing in the UK, Asia, Africa, Europe, Middle East and the Pacific.

In 2012, Peter’s next series “Island Feast with Peter Kuruvita” combined beautiful locations and scenery with sensational local cuisine through the islands of Indonesia, Vanuatu, Philippines and Cook Islands.

These popular TV series inspired his next cook book “My Feast with Peter Kuruvita” and takes food lovers on a culinary and cultural journey through the islands communities of Asia and the South Pacific. Released November 2012.

Peter’s 3rd 10-part series, “Mexican Fiesta” is currently premiering around the world and sees him travelling the length and breadth of Mexico, looking deeply into the ingredients, dishes and culture of that exciting and sometimes misunderstood country.

Peter has worked with Dilmah Tea in an ambassadorial role for many years, developing the concept of tea gastronomy. This involves hosting the annual “Real High Tea Challenge” for chefs and consumers, now a worldwide event, and recipe development.

2015 will see further development of his product and spice range, and many events in his restaurants, food festivals and guest appearances around the globe.