Print
Well known by many Australian's for his role on Kath & Kim, Peter Rowsthorn is an outstanding comedian full or personality and energy and a fabulous Master of Ceremonies. 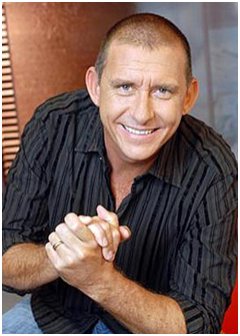 "Peter Rowsthorn was worth every penny and it was an honour to have him at our event. What a star performer.  His performance was outstanding, side-splittingly funny and relevant to the guests. You can be absolutely assured that he’d be great to book for any NZ event.  What impressed me about Peter is that he was at ease with our members and was prepared to sit, chat and have his photo taken with attendees. What a pleasant, friendly person – clearly of star quality though!"
New Zealand Food & Grocery Council

"I thought Peter got function off to a great start and had the room for the length of his intro - he then proceeded to manage our speakers in a very professional manner. Nedlands Rugby would have no problems recommending Peter for future functions."
Nedlands Rugby Club

“Excellent - Peter was a delight and a very cheerful character ......  In fact, Peter was very well received and had us all laughing throughout his presentation."
Pitcher Partners

"Peter was fabulous.  From the minute he entered the room he was funny, felt like he was a mate.  He and Sami had the most fantastic chemistry and he really made the night outstanding.  He was happy to do more than just MC and I was most impressed by the fact that he was just one of us, having a good time.  The atmosphere was electric."
Maroochydore Chamber of Commerce

"Peter was outstanding. A pretty difficult audience to address and he nailed it."
Diggers and Dealers Mining Forum

"Peters insightful and spontaneous wit and charm turned our faux paus into fabulous features of the evening - what more could we ask for!?"
Perth Advertising & Design Club

Peter Rowsthorn is a high energy, fast paced standup comedian one minute and a measured character actor the next. A masterful MC of corporate and private functions, he has been performing his slick & blistering stand up for three decades.

Most recently, Peter has appeared regularly on "Thank God You're Here" series 1, 2, 3 and 4, popped up on "Talkin’ ‘Bout Your Generation" and can currently be seen hosting the delightful “Can We Help” on the ABC on Friday nights. But Peter is probably still best known as long-suffering husband and pants-man Brett Craig on “Kath & Kim”.

Peter’s career really took off in 1988, when he was offered roles in The Comedy Company, Fast Forward and The Big Gig, all in the same week. He chose The Comedy Company and spent the next two seasons with the show. After performing in the feature film Crackers, he became a semi-regular on Hey Hey, It’s Saturday and hosted the Red Faces spin-off Gonged But Not Forgotten. He was also the host of Foxtel’s Sunday Roast for two seasons.

He also appeared as Warren Cronkshonk in hospital spoof Let The Blood Run Free and recently made several appearances on the improvised comedy series Thank God You're Here and is the host of 'Can We Help?' on ABC TV.

He is one of Australia’s most experienced stand up comics performing in just about every stand up room in the country as well as delighting numerous corporate clients. He is also very, very funny.