Print
Pip Courtney has worked for the ABC for 31 years as a radio and Television news and current affairs reporter in Tasmania ACT VIC and now Qld. She joined Landline as a reporter 23 years ago, and has been host since 2012. She has won international and national awards for her work and is committed to telling rural Australia’s stories. 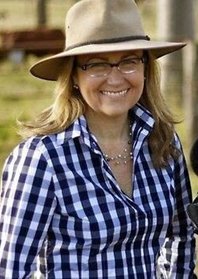 Pip was excellent. A natural talent who thoroughly understands her audience and is not afraid to say some home truths in an entertaining and warm way that the wins over the crowd. Her presence at the show grounds was noted and appreciated by large numbers of farmers (she even had a group of teenage sheep breeders star struck and asking for her card). She is a pleasure to spend time with and we highly recommend her to any event organisers.

As an MC Pip is engaging, enthusiastic and confident. She presents herself in the most professional manner. Pip gets involved in the event she hosts and takes pride in ensuring it’s an event worth going to. She listens, provides her own personal feedback and is entertaining. She is approachable and real and a delight to work with.

It was such a pleasure to have Pip, as the official Ambassador and speaker for the 2013 Rural Lifestyle Expo. Pip was extremely charming and thorough in the way she conducted herself and mixed and spoke with many people, much to their delight. As the official speaker during the event, the enormous crowd were all very interested in hearing about her life and as a journalist with the ABC. Our committee would love to have her as an Ambassador again, in the future.

A speaker who can inform, entertain and mobilise their audience to action is priceless, and Pip Courtney does this. Her message is grounded in evidence and experience, yet is conveyed from the heart, speaking to all in the room. Having Pip Courtney speak or MC your event will add value, and ensure delegates not only remember the event, but continue to speak of it in the months that follow.

Pip Courtney has worked for the ABC for 31 years as a radio and Television news and current affairs reporter in Tasmania ACT VIC and now Qld. She joined Landline as a reporter 23 years ago, and has been host since 2012. She has won international and national awards for her work and is committed to telling rural Australia’s stories.

The daughter of well known print journalist and editor Michael Courtney, Pip grew up in Tasmania and studied politics and English at University. On graduating she joined ABC news in Hobart in 1986.

At school Pip tossed up between two careers - wool classing and journalism. With assorted aunts, uncles, grandparents and cousins on the land her interest in agriculture led her to study ag science, but when it came to choosing a career journalism won out. In 1993 she combined her two interests when she joined Landline.

In 2007 Pip and former Landline presenter Sally Sara were named Queensland Journalists of the Year for a feature on depression called "Black Dog".

In 2009 Pip won the Queensland Rural Press Club's Excellence in Rural Journalism Award. The prize was a trip to the USA to attend an international agricultural journalism conference. A blog about her trip called "Saddle Up" was the ABC's most popular online blog for three months.

In 2018 Pip was inducted in the Queensland Press Club’s Rural Journalism Hall of Fame.

Pip is a professional and natural presenter who has MC'd and hosted numerous Conferences, Dinners and awards ceremonies throughout Australia. With finely tuned journalistic skills of a national TV presenter and the empathetic nature of country person, Pip easily hosts the most demanding events.