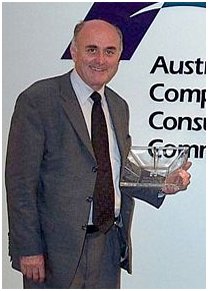 Professor Allan Fels has been Chairman of the Australian Competition and Consumer Commission since November 1995 until June 2003. Professor Fels was Chairman of the former Trade Practices Commission from July 1991 until November 1995. He was also Chairman of the Prices Surveillance Authority from March 1989 until October 1992. Professor Allan Fels was formerly the Director of the Graduate School of Management, Monash University from 1985 until 1990 and is now an Honorary Professor in the Faculty of Business and Economics at Monash University.
Professor Fels is the Co–Chairman of the Joint Group on Trade Commission and Competition at the OECD.
Professor Fels graduated with degrees in Law and Economics from the University of Western Australia and has a Ph.D in Economics from Duke University, USA.
Professor Allen Fels is now Dean of the Australia and New Zealand School of Government (ANZSOG). This is a new institution established by the governments of Australia, New Zealand, Victoria, New South Wales and Queensland, and ten universities and business schools. It provides senior management development programs, including an Executive Master of Public Administration program, for high level public sector managers.
He has been an Honorary Professor in the Faculty of Economics and Business at Monash University since 1996 and is now also Professorial Fellow in the Department of Political Science at the University of Melbourne.
Subscribe
© 2022 Platinum Speakers