For well over a quarter of a century Professor Ian Lowe AO has demonstrated leadership at the sharp end of national and international environment policy debate.  Covering environment, population, society, geographical position and economic growth, Ian’s book identified a crisis and the need to transform Australia into a model of sustainable development.   Ian is a much sought after speaker and commentator on environmental and sustainability issues across all media. 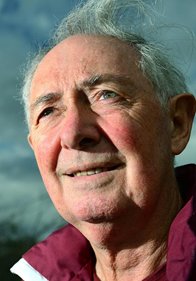 Ian captivated the audience through his great mannerism delivering an appropriate speech to the audience. Time flew by and many people would have listened to him much longer. He had supurb knowledge of the subject at hand. Great Speaker.

For well over a quarter of a century Professor Ian Lowe AO has demonstrated leadership at the sharp end of national and international environment policy debate.

In 1988 Ian was Director of the Australian Commission for the Future.  In 1995 Ian was involved with the United Nations’ first Global Environment Outlook report.  In 1996 Ian oversaw the first independent national report on the State of Australia’s Environment.

In 2001 Ian was made an Officer of the Order of Australia for services to science and technology and for contributing to public understanding of environmental issues.

For a decade (2004 -2014) Ian was President of the Australian Conservation Foundation.

A prolific author, his principal research interests focus on the intersection of policy, science and technology with an emphasis on energy use, large scale environmental issues and sustainable development.  Ian has authored or co-authored: more than 20 books; more than 50 book chapters; and over 500 other publications or conference papers.

Ian is a much sought after speaker and commentator on environmental and sustainability issues across all media.

• Emeritus Professor of Science, Technology and Society in the School of Environment and Science at Griffith University (Brisbane)

• Adjunct Professor at the Southgate Institute for Health, Society and Equity at Flinders University (Adelaide)  In 2020 the Institute was designated as a World Health Organization Collaborating Centre on Social, Political and Commercial Determinants of Health Equity.

• Former Adjunct Professor at the University of the Sunshine Coast

Additional highlights of Ian’s career include:

• 2002 awarded Centenary Medal for contributions to environmental science and the Eureka Prize for promotion of science.

• 2005 Fellow of the Australian Academy of Technology and Engineering

• 2009 – received the Konrad Lorenz Gold Medal, a biennial prize for contributions to sustainable futures awarded by the International Academy of Science, Health and Ecology.  The award is “For initiatives through which the transfer of methods and proven findings into practice appears achievable, which are obviously mature, but nevertheless not sufficiently implemented.”

Science and Technology for the future