Print
Stacey Thomson has a passion for animals and the great outdoors was evident from an early age when she went camping with her family to the Great Barrier Reef and Lamington National Park: "I still have vivid memories of turtles hatching in the sand and campfires at night”. A career as a Park Ranger was a natural progression. 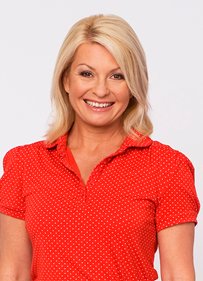 Stacey Thomson has been an ambassador for Radio Lollipop for many years. She hosted our recent Radio Lollipop Brisbane Fundraising Ball. Stacey is totally professional yet personable which allows her to easily connect with our guests. Stacey’s easy going nature means that she is flexible and accommodating which ensured our night was a complete success. As a well-known television personality, many of our guests knew of Stacey and wanted to have their photo taken with her. She was only too happy to oblige which also contributed to our guests having a fantastic night. I would highly recommend Stacey for any MC or hosting events.

Ranger Stacey travels from QLD
Fee Range: Up to $5000

Proud to be one of the original presenters on Totally Wild, Ranger Stacey has chalked up more than 20 years as a wildlife presenter on Australian children's TV.

Stacey Thomson has a passion for animals and the great outdoors was evident from an early age when she went camping with her family to the Great Barrier Reef and Lamington National Park: "I still have vivid memories of turtles hatching in the sand and campfires at night”. A career as a Park Ranger was a natural progression.

Stacey has garnered an impressive list of achievements since graduating from Queensland Agricultural College in 1983. Fresh from Uni, Stacey landed her dream job with the Queensland Department of Environment as a Ranger working at some of Queensland's most popular National Parks including Main Range, Lamington, Moreton Island and St Helena Island. In 1987 she secured her first TV role as an 'environment' presenter on the long running, Logie Awarding winning children's program “Wombat”. Since then she has appeared consistently on the small screen in top children's programs including “Cartoon Company”, “Bushbeat” and seven-time Logie Award winning “Agro's Cartoon Connection”. One of those Logies still has pride of place in Stacey's living room.

In 1998, after successfully blending her careers as Park Ranger and TV presenter, Stacey stepped down from her official ranger role to join Network Ten full-time. She says over the years her favourite stories have always involved travel and animals... "I've hand fed giraffes, been swimming with dolphins, given an elephant a shower, and even got up close to Tassie devils and tigers!”  In addition to reporting for Totally Wild, Stacey also presents documentaries for Network TEN and says she is most proud of "Go Forth and Multiply", "Devil’s Advocate", "Wombat Rescue" and “Bilby Dreams”.

For several years Stacey appeared as a regular guest on “Rove Live” and worked with Steve Irwin on “Croc Hunter Live” for Animal Planet. In November 2009 she was invited to be a special guest on “Chelsea Lately”.

Stacey is an Ambassador for Planet Ark, the Animal Welfare League and Radio Lollipop at Brisbane’s Mater Children’s Hospital.


A favourite with people of all ages, Stacey's universal appeal stems from her natural and vivacious personality and her ability to have fun while at the same time manage to convey environmental messages. "Writing and presenting stories for Totally Wild gives me the opportunity to share my love of the diversity of Australian landscapes and the unique creatures that live in them”.

Stacey and her husband Rob have two daughters, Bridget and Madison. When she has some spare time, Stacey likes to walk Ralph the family dog, go on holidays and catch a good movie.