Print
A science graduate in computer programming and pure maths, Red Symons has established himself in the entertainment industry as musician, author, stage & screen performer, record producer, composer, columnist and, most recently, breakfast... 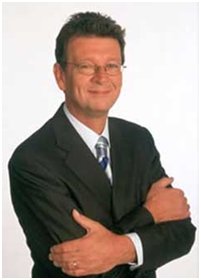 A science graduate in computer programming and pure maths, Red Symons has established himself in the entertainment industry as musician, author, stage & screen performer, record producer, composer, columnist and, most recently, breakfast announcer on ABC radio 774, Melbourne.
Red's theatrical flair and humour was apparent from his early days as guitarist with the band "Skyhooks" who swept onto the Australian music charts with their "Living in the 70's" anthem, and many hits including "Ego is not a dirty word", "Women in Uniform', "Blue Jeans" and "All My Friends are Getting Married".
Red Symons’ popularity as a media personality, however, was evidenced during his years with the long-running national television program, "Hey Hey It's Saturday". The Hey Hey team enjoyed music mixed with spontaneous banter and fun'n'games. Paradoxically, Red became one of the shows most endearing performers despite being the heartless and sarcastic judge in the weekly "Red Faces" segment.
There can be few performers who have appeared on Countdown with a number one record , Neighbours in its first week ever, escaped from the Big Brother house, lost a quarter of a million dollars on Who wants to be a Millionaire , been measured as Australia's smartest celebrity ( yes, it's an oxymoron ) on The National IQ Test and written music for Blue Heelers, whilst contributing a regular column to The Age newspaper. In between all this he managed to fit in a number of stage shows that inevitably involved some sort of cross-dressing. Red also wrote the music for Australia 's first condom commercial.
Popular on the corporate and arts speaking circuit, a regular on ABC TV's Einstein Factor, a judge on 7 Network's Australia's Got Talent, Red Symons can be heard Monday to Friday, 5.30am-7.45am on ABC radio 774.
Subscribe
© 2022 Platinum Speakers