Print
Rhonda Burchmore has had a stellar career in entertainment over the past 25 years. She is loved by all Australians for her personality and performances. Rhonda is an all-time favourite female performer and entertainer.With a smile... 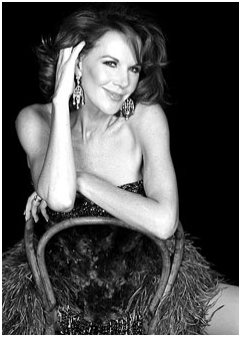 Rhonda Burchmore has had a stellar career in entertainment over the past 25 years. She is loved by all Australians for her personality and performances. Rhonda is an all-time favourite female performer and entertainer.


With a smile that could light up the Sydney Opera house and a voice that's as big, bold and colourful as Uluru, Rhonda Burchmore has endeared herself to the hearts of all Australians.

After 25 years in the business, this vivacious, flame-haired beauty continues to turn heads wherever she goes and draw thunderous applause wherever she performs.

She has forged a lengthy career in one of the toughest and most unforgiving industries, show business, yet as critics attest, she just keeps going from strength to strength.

Few Australian entertainers have shared her status and immense popularity amongst her peers, who admire Rhonda for her big personality, big heart and enormous capacity to give back to the industry that has shaped her career.

Here are some highlights of Rhonda Burchmore's illustrious 30 year career:

• Appeared in 1982 the original role as Kate in The Pirate Movie;
• In 1988 had for her first major Theatre speakers breakthrough in Sugar Babies opposite Gary McDonald and Broadway performer Eddie Bracken:
• Reprieved her role opposite Mickey Rooney and Ann Miller in London's West End Theatre speakers Production;
• In the UK also starred in Anthony Newley's Musical Stop The World I Want To Get Off;
• In the 90's performed a role especially created for her in Hot Shoe Shuffle;
• In 1997 performed the opening Cabaret spectacular Red Hot & Rhonda to an audiences of over 60,000;
• Secured a role on Broadway in the Irving Berlin classic Easter Parade;
• Appeared in Stephen Sondheim's Into the Woods;
• Was a regular Cabaret guest in the 90's in the long running Australian Variety Show Hey Hey It's Saturday;
• In 1991 secured the lead role in Mame;
• Was the leading role in Annie Get Your Gun;
• In 1999 and 2000 as she produced her own cabaret show which played in a number of major venues around the country and was rewarded with an ACE Award for Best Female Variety Performer and Variety Performer of the Year in 1999 and in 2000 the ACE Award for Best Female Variety Performer and the Mo Award for Best Female Variety Performer;
• In 2000 played the role of Adelaide in Guys & Dolls;
• In 2001 again played the lead role in Mame;
• In 2001 played the role of Tanya in the very successful Mamma Mia;
• In 2004 played the role of Penelope in the highly acclaimed Musical Urinetown the Musical;
• In 2004 produced her own Shows My Funny Valentines and Fever in 2005;
• In 2006 starred in the production of Tom Foolery;
• In 2007 starred in RESPECT A Musical Journey of Woman
• Featured roles in Song and Dance , They're Playing Our Song, Lend Me a Tenor;
• Played with the Victorian Opera as Queen of the Fairies in Iolanthe;
• 2011 appeared in the inaugural Perth Cabaret & Comedy Carnivale at HMT Perth;
• Rhonda is the most prolific major star to have performed at the Adelaide Cabaret Festival for the past nine years having appeared in no less than six solo performances as the main artist of the Cabaret Festival;
• 2011 currently appearing in her own one person Concerts with her own biographical Show Legs 11;
• 2012 Also running concurrently Cry Me A River in her portrayal of the Julie London Story.

"Rhonda Burchmore took the stage with more sparkles than a galaxy spilling over with stars ......her numbers were explosively delivered."
Courier Mail

"It was exquisite. You completely evoked the era, the mood and the artist. It was mesmerising, sexy, languid and funny."
Lisa Campbell – Artistic Director Adelaide Cabaret Festival
Subscribe
© 2022 Platinum Speakers