Print
Richard Champion shares his experiences of life in football in a most entertaining way. As your MC, he is professional, warm and humorous – a delight to work with Champs injects energy, passion and professionalism as a speaker or event host. 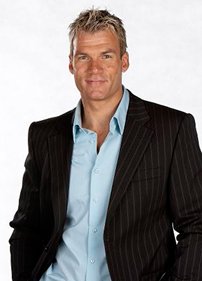 Richard is an electric and entertaining speaker.  His adaptability and professionalism means he is our go-to person for MC roles and guest speaker.  His background in football and television presenting means that he has plenty of stories and always presents in a fresh and exciting way.  Richard is always prepared for the job and exceeds expectations – we highly recommend him!

I have had the pleasure of working with “Champs” in 2008 for the Queensland Rail Silver Spike Series.  Richard was the MC for the event series, briefings and dinner engagements, he is a hard worker and very personable.  I would highly recommend Champs for any type of speaking engagement. He immerses himself into the subject matter of the event and puts the client at ease.

Endeavour Foundation has hired Richard or ‘Champs’ for multiple charity events. Champs is charismatic, engaging and a pleasure to work with. I would have no hesitation in recommending Champs for any event.

The man has charisma in spades and is a true professional.

Richard was an Excellent speaker and done really well on the night.  Everyone was very impressed and thought he was the best speaker we have had yet. He even sung us his Goodbye to Akker song, which was awesome. He definitely captivated the audience.  Nice bloke all round and would recommend him to anyone for a speaker.

Richard was simply outstanding. He was very professional and entertaining whilst also delivering an important message to the audience. His delivery was well tailored to suit the audience and was well received. I would highly recommend Richard to others looking for a suitable speaker. Everyone enjoyed his 'tribute to Acker'.

Richard Champion travels from QLD
Fee Range: Up to $5000

Richard Champion or ‘Champs’ as he is better known, has had a football career spanning 14 years, including 10 years with the Brisbane Bears / Lions before retirement at the end of the 2000 season. During his career he finished in the top six places for the Best & Fairest Awards three times. He also won the Bears’ prestigious “Most Professional Player” award in 1994 and “Best Clubman” honours in 1995.

Qualifying for entry to the AFL’s prestigious 200 Club at the conclusion of his career, Richard Champion won lavish praise (rarely given) from coach Leigh Matthews for the professional manner in which he conducted himself. He was awarded Brisbane Lions Life Membership at the end of the 2000 season for his 10 years of loyal service to the club.

Richard Champion has a multi-talented personality, always prominent in the club's off-field activities and in 1998 won an AFL Talent Show on Network Seven for his marvellous impersonation of Jimmy Barnes. That singing talent was put to good use when ‘Champs’ competed in the popular Channel Seven program “It Takes Two”.

You can also catch Richard on a variety of radio shows including a co-hosting role on the “Sportsbet Breakfast Show” each morning on Radio TAB and is a member of “Triple M’s Call Team” commentating on all the Brisbane Lions games during the season. Richard really shines however, on The Great South East each week and “Creek to Coast” with Channel Seven.

There is no challenge that Richard Champion has backed away from and his competitive nature and high level of fitness make him an obvious choice for tougher assignments. He loves golf and plans to call Brisbane home for many years to come with his with Anne-Marie and daughters Georgia and Grace.

Richard shares his experiences of life in football in a most entertaining way. As your MC, he is professional, warm and humorous – a delight to work with Champs injects energy, passion and professionalism as a speaker or event host.