Print
Richard Stubbs is most well known as Australia's finest stand-up comedian. His cutting wit and clever delivery makes for rapid-fire entertainment and his winning style makes him the most potent force in Australia's media and corporate scene. For Over 30 Years Richard Stubbs has been successfully hosting corporate events. 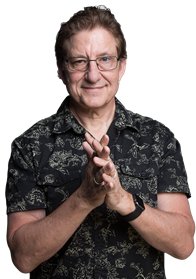 Your observant comments on each of the speakers helped to frame the sessions and kept the morning moving at a snappy pace—a result that was appreciated by both the audience and the organisers. Your comments were particularly relevant, showing a good grasp of many areas in education.

As MC for our recent launch of Telstra's Wireplay Computer Games Network Richard, in a nutshell, was fantastic and pivotal in making the launch a huge success. Apart from being a seasoned professional and a pleasure to work with, his humour, attitude and performance on the day really made the launch come to life!

All I can say is thank god we had Richard Stubbs at the Occupational Health and Safety Awards, because he saved the night. In between a power failure that stopped the audio visual presentation for about five minutes and a drunk attendee who decided she didn't like the awards Richard's sense of humour and quick wit helped turn a potential disaster into what ended up being the highlight of the night!

After a try out routine at Melbourne’s Last Laugh in 1983, Richard Stubbs’ style of anecdotal comedy, based on real life experience proved an immediate winner. His ability to hold an audience enthralled with his laugh packed stories earned him a reputation as the hottest arrival on the comedy scene. Since then, Richard has performed in every comedy room imaginable including those in Montreal, Los Angeles, London, New York and throughout Australia. Over the years he has completed sell-out seasons at the Melbourne International Comedy Festival.

In addition to stand up, Richard has an amazing radio career starting in 1984 on 3XY. He became a household name after nine years on Triple M, his morning and breakfast shows dominating the ratings. Richard is one of the few to ever transition from commercial radio to the ABC. He proved his versatility with 11 years at 774ABC, taking his afternoon shift to No.1.

Starting in the early 80’s, Richard has appeared on Australian television in a number of roles. His first was as a giant kangaroo on the ABC! His TV Credits included that of writer, interviewer, co-host, host, and comedian. He has been a guest on shows, hosted his own shows and even acted!

He was a regular on The Midday Show , hosted shows such as Hey Hey Its Saturday, the ARIA’s and successfully did over 120 Tonight Shows as the Friday host of “Tonite Live”. Television continues in 2017 co-hosting on Studio10 & appearing regularly on Today Extra.

2017 saw a successful Melbourne International Comedy Festival show and he’s busier than ever in 2018 touring his sell-out show “In Full Flight” all over Australia. So far this year he’s performed the show at numerous venues in Melbourne, Adelaide Fringe, Brisbane Comedy Festival, Gold Coast, Perth, Wagga, Canberra, Goulburn and Orange and there’s more to come!

For Over 30 Years Richard Stubbs Has Been Successfully Hosting Corporate Events. His unique combination of intelligence, warmth and humour means he is able to deliver effectively to your audience.

With a radio career of over 30 years spanning both commercial and ABC (No 1 in any time slot he has worked) and a TV career that including 120 Tonight shows, Richard is able to get the best from any interview or discussion. This rare expertise has also provided Richard with quick thinking and problem solving techniques. As a corporate event host, he has the ability to pull an event back into line successfully where most hosts fail.

His style of anecdotal comedy, based on real life experience proved an immediate winner. Over the years his ability to spin stories filled with laughs has earned him a reputation as a top comedian. Since then Richard has performed in every comedy room imaginable, including Edinburgh, London and Montreal – not to mention Australia! He is certainly well qualified to entertain your audience.

His long success is also due to his professionalism and abilities as a communicator. Richard is able to tailor material for your needs and work to your requirements. Richard can provide a stand-alone comedy spot, host an awards or conference dinner, interview and conduct Q & A events with CEO’s, for product launches or for guests who are not used to telling their story or facilitate conferences.