Print
A well-known and much loved AFL player, Robert DiPierdomenico ‘Dipper’ played 240 games during his football career. Now a national media personality, Dipper makes regular appearances on Before the Game, Postcards and Fox Footy’s Auskick’n Around.  Dipper is a great speaker and MC bringing his humour and character to each engagement. 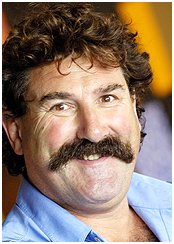 Yesterday was a great day
Solution 6

Dipper's passion & enthusiasm was contagious at the lunch, and without a doubt helped with the success of our charity fundraiser. He went above & beyond to make the day one to remember for all who attended. Dipper's sense of humour & amusing anecdotes will be talked about up here in the Top End for a long time to come!
Australian Hotels Association - Northern Territory

I was very impressed with Dipper’s performance, not only as a guest speaker but his down to earth approach & the way he interacted with the crowd. The response from our clients was overwhelming, he went out of his way for photos etc. Nothing was a too difficult. I’ve hired many performers over the years but I would rate his performance as no 1, he definitely kept everyone entertained with his humour.
MetJak Pty Ltd
Robert DiPierdomenico travels from VIC
Fee Range: Up to $5000

A well-known and much loved AFL player, Robert DiPierdomenico ‘Dipper’ played 240 games during his football career. Now a national media personality, Dipper makes regular appearances on Before the Game, Postcards and Fox Footy’s Auskick’n Around.  Dipper is a great speaker and MC bringing his humour and character to each engagement.

After an inauspicious debut with the Hawks back in 1975, The “Big Dipper,” as he likes to be known, was best afield in the 1978 Grand Final against North Melbourne.

The 20-year-old from Kew had been kicking around the club since 1975, but on September 30, 1978, he hit the big time when he was named on the bench for the Grand Final. He gathered 15 kicks, shot out six handpasses and took six marks - eclipsing the performance of Leigh Matthews.

The legend had been born.

His courage was underlined in the 1989 Grand Final win over Geelong. He played out the match with a punctured lung, broken ribs and according to Dipper, two broken legs and malaria... nothing could stop him on the last day in September.   He played in five day Premiership sides and four night Grand Finals and over a career spanning 240 games, was a Victorian regular.

In 2007, Dipper enjoyed one of his proudest moments when he was inducted into the AFL Hall of Fame   Post AFL, Dipper developed into a national media personality via his work on Channel 7. He is well known for his role as 'Boundary Rider' for the network and now continues his work with the network as a panel member of The Sunday Footy Panel with Rex Hunt.

Dipper is also heavily involved with the AFL as the ambassador for their junior development program, Auskick. Dipper's role includes educating Australia's youth about Australian Rules Football - a role that takes him to every corner of the nation.

Robert 'Dipper' DiPierdomenico's energy and enthusiasm will delight all ages. His stories will inspire, motivate, enlighten and will be a talking point at any function. He is a highly recognised speaker and MC.