Popular breakfast radio host, Robin Bailey has embraced us with her humour and style for over 20 years.  Robin is a professional Master of Ceremonies and Keynote speaker. 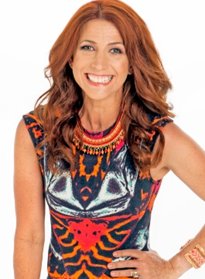 Robin Bailey travels from QLD
Fee Range: Up to $5000

Popular breakfast radio host, Robin Bailey has embraced us with her humour and style for over 20 years.  Robin is a professional Master of Ceremonies and Keynote speaker.

Robin began her career as a journalist in Sydney and has lived in all the major capital cities working as a broadcast announcer and television presenter. Robin is a regular guest on various national television shows including Today – Weekends, The Project and Nine News Now, as well as hosting her own podcast ‘The Well’ and contributes to mamamia.com.

Robin’s experience has been wide and varied. She has done everything from hosting Hot Science a national children’s television show for Channel 9 to doing the weather on TasTv to presenting and producing a female based national radio show. Robin is also very involved in charity events having worked for The Royal Children’s Hospital (QLD), The Asthma Foundation (QLD) and Dress for Success (QLD) as well as visiting schools to help motivate and encourage young girls.

Robin Bailey is part of the team at Brisbane’s Feel Good Radio Station 97.3. Working with Terry Hansen and Bob Gallagher on the Morning Show her bright, breezy delivery and her witty and erudite style endears her to her loyal and ever growing audience. Her favourite moment on air she says is every day when she has the honour of listening as others tell their stories.

In 2017 Robin joined the Triple M crew with Greg Martin & Ed Kavalee.  Robin Bailey has more than 15 years' experience in radio, television, corporate speaking, voice overs and event hosting, she is one of Brisbane’s best known voices and faces.

In 2020 she returned to 97.3FM in Brisbane with the old team of Robin, Bob and Terry for breakfast radio.

As well as being a media presenter, Robin is also a very sought after corporate speaker and emcee. She is a natural presenter who is best known for her professional, friendly and down-to-earth attitude, which allows her to relate to people spanning across all age groups and demographics.

When not interviewing big celebrities like Mathew McConaughey and Pink or attending her fair share of opening nights, Robin loves to spend time with her three school aged sons.