Print
An outstanding speaker and gifted influencer Rodney Eade has a strong track record providing the leadership and direction to transform culture from board level to the factory floor. With his foundation in elite sport, he has been able to build high performing environments and teams for a diverse range of organisations. 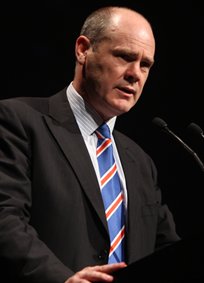 I would highly recommend Rodney to any business for its next training and development session. His engaging style, recounting his experiences in leadership, culture and change management was absorbing and educational.

We were all really impressed with the way Rodney Eade's message reached into the heart of TAFE Tasmania's vision for the future of the Automotive team. His analogies were applied to the themes of the conference in both far-reaching and practical ways. Having Rodney Eade open our conference set just the right note for the two days. We found ourselves constantly referring back to something Rodney had explained during the sessions and forward planning. Thank you Rodney!

As a 50 year old veteran in real estate we sometimes think we know it all. Even though we run a fairly successful business I felt something was missing. When you spoke at the Ray White Symposium in August and explained how your team works within the structure you have in place the light suddenly went on. Using the pyramid structure, we have adapted it to our industry and also included our team values. Before Christmas our team, consisting of administration, rental portfolio managers, salespeople and directors, all set our KPIs and now have a system in place that can be measured and now will eliminate those one percenters that drag us down. It was refreshing to hear you talk and you have provided the inspiration to change. Now I am sure my role as 'coach' is simplified and I am now looking forward to and excited about the year ahead.

Rodney was extremely down to earth and very engaging.

Rodney Eade travels from VIC
Fee Range: Up to $5000

Rodney's longevity as a senior coach at the highest level of Australian Rules Football for 17 Years is a testament not only to his talent, people management, and strategic prowess, but his ability to transform culture. Amongst his many achievements, Rodney is a four time premiership player and was awarded AFL Coach of the year in 1996.

An outstanding speaker and gifted influencer, Rodney Eade has a strong track record providing the leadership and direction to transform culture from board level to the factory floor. With his foundation in elite sport, he has been able to build high performing environments and teams for a diverse range of organisations.

Rodney exemplifies how unwavering determination, together with the right vision, you can achieve the very best. He is a polished motivational speaker with a valuable message for both individuals and businesses alike.

Inducted as an inaugural legend in Tasmanian Football’s official Hall of Fame in 2005, Rodney Eade began his football career with Glenorchy in 1975, where he made an immediate impact, catching the eye of mainland talent scouts and being voted the best first year player in the Tasmanian Football League.

The following year, Eade moved to Hawthorn where he remained until 1987 for a return of 229 games with 46 goals. During this time he played in the 1978 premiership win over North Melbourne, and also figured prominently in the 1983 grand final win over Essendon. It was in 1983 that Rodney was made a life member of the Hawthorn Football Club.

In 1996, Rodney took over the reins from Ron Barassi as Head Coach at Sydney, and was the most successful coach of the Swans since Jack Bissett in the 1930's. During his tenure the club made the finals in 1996-1999 and again in 2001, losing the grand final in 1996 to the Kangaroos.

2003 saw Rodney serve as media writer and commentator for the Western Bulldogs before being appointed Coach for the 2005 season. In his first season here, he took an under-achieving Bulldogs team within a goal of the finals series, having finished with less than five wins in the previous two years. In 2006 Rodney then took the team to a final series for the first time since Terry Wallace in 2000.

Rodney remained with the Bulldogs until 2011 when he was appointed Football and Coaching Strategist by the Collingwood Football Club, replacing outgoing coach Mick Malthouse. Eade coached the Australian International Rules football team in October/November 2011. He was appointed Gold Coast Suns coach in October 2014 until the end of 2017.

Rodney Eade's leadership, team building and motivational skills are infused into his addresses, leaving audiences with a positive and refreshed attitude towards the challenges that lay ahead both personally and professionally.. He is able to draw on his experiences in his football career and incorporate anecdotal content and question and answer sessions that result in high audience participation.

Rodney Eade is a highly respected motivator and is driven towards achieving the very best in team success in both the sporting and corporate arena.

The Critical nature of the One Percenters

The Pyramid of Success