Print
As HG Nelson and Rampaging Roy Slaven, Greig Pickhaver and John Doyle are heard on Sydney’s JJJ every Sunday afternoon in their popular programme THIS SPORTING LIFE which has been searing itself into the nation’s consciousness since 1986. Roy and... 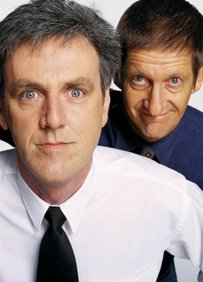 As HG Nelson and Rampaging Roy Slaven, Greig Pickhaver and John Doyle have been searing themselves into the nation's consciousness since 1986 with programmes including This Sporting Life, Club Buggery, The Channel Nine Show, Planet Norwich, The Nation Dumps and the hugely successful Olympic broadcasts The Dream and The Ice Dream.

Slaven and Nelson are back at Triple M in 2017 hosting the national Saturday morning show ‘The Sporting Probe with Roy & HG’, where they provide a unique take on significant sporting events around Australia. “Rampaging Roy Slaven was recently acknowledged by the AFL and Racing Victoria as Australia’s number one prober,” he said.

Inextricably linked with Australia's sporting achievements, Roy and HG amused the nation every weekend for 22 years with This Sporting Life on Triple J.

The pair regularly presented radio commentaries of the AFL and Rugby League Grand Finals known to sports lovers as The Festival of The Boot. They also covered Wimbledon, on two separate occasions, bringing their own unique view of this great event to their listeners on the ABC.

At the close of 2008, the pair moved to Triple M to host the afternoon show in Melbourne, Sydney and Brisbane on Mondays and Fridays. In 2010, during the FIFA World Cup, they presented Route One.

Their first book Pants Off has become an indispensable part of any sportsman's library as are their cassettes such as Wicket to Wicket, their seminal guide to cricket.

Roy and HG are often asked by the media to comment on matters of local and global importance and their insights into the world of sport are always keenly sought. HG has written, produced and presented several documentaries and documentary dramas including Changi and Two Men in a Tinnie.

Both HG and Roy are popular after dinner speakers. They have appeared at such diverse events as the Perth Art Directors Club Award dinner, the Modern Motor Magazine Best Car Award luncheon and the Sydney Festival Country Music Concert In The Park.

In 2010 Roy and HG were both awarded an Order of Australia, recognizing their outstanding contribution to media and charitable organizations.


HG distils the philosophy of their success into the following words - Go in hard, early and often. Win the stink and win the match. And remember: in or out; it is always worth a shout!

Roy and HG are highly sort after for corporate events. They have appeared at a diverse range of events over the years including, MC’s for the Press Gallery Midwinter Ball, the Audi V8 Launch, Nike corporate dinner, the Toast event London, Morgan & Stanley conference dinner in London, the Black and White Ball in Singapore, as hosts of the PGA Golfing Legends Panel event, Guest Speakers at the 2012 NSW Premiers Australia Day Lunch, the Macquarie Securities event in Hong Kong, the Fosters sports dinner, and special guests at the Morgan Stanley event dinner in London.