Print
One of this country’s true motorsport heroes, Ingall has a reputation of being a fierce competitor on track and one of the most fan and sponsor-friendly drivers away from it. Russell Ingall began his motor racing career at age 12 competing... 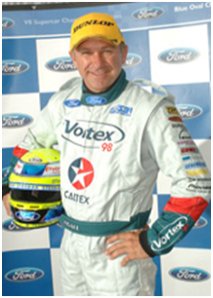 One of this country’s true motorsport heroes, Ingall has a reputation of being a fierce competitor on track and one of the most fan and sponsor-friendly drivers away from it.
Russell Ingall began his motor racing career at age 12 competing at the Whyalla go-kart track in South Australia. After winning an Australian Junior and several Senior karting Championships he raced headed overseas to race karts in Europe before making the transition into Formula Ford. Competing in only his second Formula Ford event, Ingall finished third in a support race at the 1988 Adelaide Formula One Grand Prix.
Over the next few years Ingall proved to be a force in the Australian Formula Ford Championship finishing runner-up before claiming the crown in the 1990. After almost claiming the British Formula Ford Championship in 1991, Ingall headed to Europe in 1992 to drive for Opel Team Schiubel in the prestigious German Formula 3 Championship.
Ingall made history in 1993 in Britain driving for the factory Van Diemen team to win 13 out of the 16 races in the British Championship and in the process recording the highest number of wins in a single season in the history of Formula Ford. After spending the first half of 1994 in the Japanese Formula 3 Championship Ingall made his debut in the Australian Touring Car Championship driving for Wayne Gardner’s team at Sandown and Bathurst.
Russell Ingall went on to win the 1995 British Formula Renault Championship before joining Larry Perkins for his team’s campaign for the endurance races back in Australia. Ingall figured prominently in the team’s epic last to first victory at Bathurst. He would then become a permanent face of the V8 Supercar Championship throughout 1996. During his first year, Ingall claimed his maiden victory at Calder Park and then went on to win the Bathurst 1000 for the second time in 1997.
In his seven years with Perkins, Ingall finish runner-up in the championship three times (1998, 99, 2001) and was third in 1997. Following seven years with the Perkins team Ingall moved to the Stone Brothers Racing outfit at the start of 2003 in winning style taking out the support races at the Australian Grand Prix. In 2005 Ingall collected his first V8 Supercar title after being runner-up four times previously. Eighth in the 2006 championship did little to represent the consistency Ingall carried over from the 2005 championship, as only one of two drivers to complete all 34 races in the 2006 season.
Subscribe
© 2022 Platinum Speakers