Print
World record breaker Ryan Campbell is the youngest person to fly a single-engine aircraft solo around the world. He started his flight from Wollongong, in southern New South Wales, and has spent 200 hours flying through 14 different countries.... 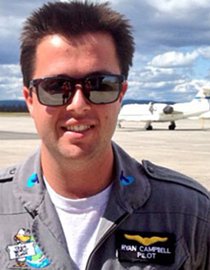 Ryan Campbell travels from QLD
Fee Range: Up to $5000

World record breaker Ryan Campbell is the youngest person to fly a single-engine aircraft solo around the world. He started his flight from Wollongong, in southern New South Wales, and has spent 200 hours flying through 14 different countries. His journey clocked up more than 24,000 nautical miles.


Ryan Campbell is an aviator at heart, an adventurer of spirit and young man with an amazing story to tell. He has achieved more in less than two decades than what most will in a lifetime.

At 15 he became the youngest pilot in Australia, at 18 he had a commercial pilot’s licence and a little over a year after that he made international headlines.

In June 2013, Ryan Campbell, then just 19-years-old, set off from Wollongong in NSW in a bid to become the youngest pilot – and first teenager – in history to circumnavigate the world solo in a single engine aircraft.

Seventy days later after stopping 34 times in 15 countries and covering more than 24,000 nautical miles Ryan’s Teen World Flight became a reality. He had achieved his dream of flying around the globe and became Australia’s latest world record holder.

The entire journey, captured by Ryan Channel Nine’s 60 Minutes program, was more than just a couple of long-haul flights too. It was an odyssey that had all begun in a young boy’s mind more than a decade before and had been two years of full-time planning.

Showing maturity, determination and courage beyond his years, he fundraised, planned and fundraised some more to ensure his quarter of a million dollar dream would be a success.

Now with his feet firmly planted on the ground, Ryan is planning to travel Australia inspiring young people to follow their dreams both in, and beyond, aviation.

Ryan’s ability to regale people of all walks of life with stories of perseverance, fear, planning, teamwork and the spirit of adventure make him a must see.
Subscribe
© 2022 Platinum Speakers