At the age of 19,  Sam Bailey was involved in an horrific car accident whilst jackarooing in the Northern Territory. This accident rendered him a C6/C7 quadriplegic with paralysis from the chest down, limited use of his hands and arms and an inability to regulate his body temperature. Sam has overcome all these challenges to become an ultralight pilot, a farmer, inspirational speaker and co-author of the best selling book "Head Over Heels". 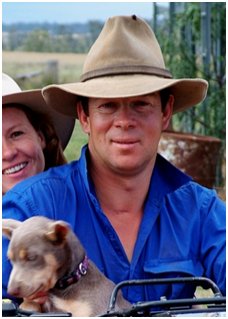 “Sam Bailey was the perfect choice for our guest speaker at the Business Awards. Moree has gone through some tough times recently with 2 of the biggest floods in 36 years ravaging our town last November and February. His story made us realise that when you get knocked down like that the only way is up. His zest for life is contagioius and after hearing his story you realise his life is still full of daily battles but that doesn't stop him from living it to the fullest. Not only do Moree have a lot of respect for Sam, after Friday night, Jenny Bailey was put on a pedestal of her own, what a wonderful human being she is. Thank you all for allowing us to hear and feel their experience."
Moree & District Chamber of Commerce & Industry

"Sam Bailey was an inspirational speaker. He captivated his audience with both words and feeling, and gave us the inspiration required to get out there and make a difference, just as he has done. He had the audience of state school principals laughing and crying with his message, which was delivered with true feeling. His presentation was also highly professional and polished. He was a genuine speaker and spoke from the heart."
Principal - Wellers Hill State School

“You were truly inspirational and loved by all who heard you. Such courage to rise above your hardships and to portray to those assembled how challenges can be overcome with perserverance and tolerance."

Sam's talk chronicles his life, from a childhood sporting hero growing up wanting to be a farmer just like his dad, through to the day his life changed forever at the fork in a road in the Northern Territory and it's aftermath.

Sam's is not a story of sadness but rather, triumph. He talks of turning tragedy into hope and how he beat the odds to fulfil his life-long dream of being a farmer.

Despite being paralysed with only limited use of his hands and arms, and intolerance to heat and cold, he went home to the family farm against the advice of medical experts. Here he learnt to ride a four wheel motor bike which became his "legs" around the property. He devised a hoist to lift him into the farm machinery and converted tractors, the harvester, front end loader and dozer so he could drive them. He also learnt to drive a car again, travelled overseas and even tried snow skiing.

As if he hadn't already achieved enough, Sam "climbed" his very own "Mount Kosciusko" when he learnt to fly an ultra light aircraft.

But Sam's story is much more than that. It's also a story of love and romance that will send your spirits soaring, finding his soul mate in former Tamworth-based ABC radio Rural Reporter Jenny Black. Sam proposed to "live" on regional radio, jamming phone lines into the station and exhausting the fax machine of paper.

The love story appeared on ABC TV's "Australian Story" in 2000, with an overwhelming response and then in April 2006, Sam launched his book "Head Over Heels - A Story of Tragedy, Triumph and Romance in the Australian Bush", which he co-wrote with Jenny. Within weeks it was on the ABC Books' best sellers list and has  now been reprinted nine times. Proving popular with all ages, including many children and young people, many say the book has changed their lives.

Today Sam and Jenny live and work together on Sam's family property in northern NSW, in between travelling the country telling their story and giving inspiration to others. they are also working towards their next big goal, for Sam to become the first quadriplegic in the world to fly a helicopter.

The couple intend to write a second book about the journey of working towards the goal of flying a helicopter together, and ultimately flying into schools to speak to students and inspire them to fulfill their own dreams in life.

The Commonwealth Bank - one of Australia's largest public companies - is so inspired by Sam's dream of flying into schools, it is offering financial support to make this community project become reality.

Sam Bailey is a truly inspirational speaker, captivating audiences and speaking from the heart, with a story that will resonate and inspire long after your conference ends.
Subscribe
© 2022 Platinum Speakers