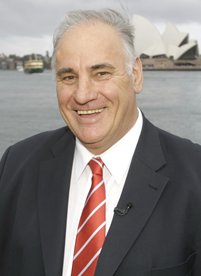 Sam was Great! He arrived just after lunch and stayed around until the show. He was happy to have a chat with anyone -  he really appealed to such a broad crowd ….men, ladies, various ages ,everyone thought he was great! He was humorous, interesting and his stories were just fantastic he really calls a spade a spade. I think it would have to be one of the best shows we have had!

It was a fabulous night, Sam was the perfect start to the evening…..like any business you do have a few issues with people along the way, it was fantastic having Sam there, he knew exactly what to say to really make everyone relax from the outset, his words were great, he made everyone realise at the end of the day we are all just people. It is the second time we have had Sam attend one of our functions in 4 months so we got to know him a little bit better and vice verca. We couldn’t be happier with how it all went.

Very Good. 100% as expected. Sam has a public profile that is well recognised, so the audience were well aware of what to expect - in other words, expect the unexpected. On that count Sam didn't disappoint. He uses humour and 'colour' extremely skillfully, so that he maintains the ear of his audience - yet at the same time imparts knowledge and experience of life. In this case Sam spoke of the importance of being honest, speaking your mind, remembering to add value and profit to your business but still having fun.

I was happy with how it all went, very pleased. Sam was very enjoyable and had a good chat with the crowd. The Media coverage was good, there was a write up with a photo of Sam & a couple people at the event in the WA Business pages. It achieved what we wanted which was to get people talking, which they are, so it was good.

Sam is easygoing and professional whilst humorous at the same time. He really has his own presence and created a great atmosphere. He is an excellent speaker and very entertaining, Someone people really enjoyed listening to, A great night!

Sam Kekovich travels from VIC
Fee Range: Up to $5000

A naturally gifted entertainer, Sam brings a wonderfully satirical, irreverent and hard-hitting brand of humour to any occasion. His lively presentations draw on all his experiences and the characters he has encountered over the last 30 plus years of his involvement in football, and life.

Kekovich started his career with the North Melbourne football club in 1968, and in the following year, won the club's best and fairest award, represented Victoria, and was the club's top goalkicker, kicking 56 goals. From that point, his brilliance was displayed only in flashes due to injury and other non-football activities, including soccer, trampolining, and posing naked in the "Truth" newspaper. However, he did play a major role in the club's breakthrough premiership win in 1975 under AFL great Ron Barassi. Sam holds the dubious honor of being North Melbourne's only player who was absent from the club's 1975 Premiership team photo.

After playing 125 VFL games for the Kangaroos between 1968 and 1976, he moved to Collingwood in 1977, but only played four games, retiring that season.

He has carried on his flamboyant style into the media sector, being most notable for his rants on the ABC show The Fat and a breakfast show on Melbourne radio station 3AK.Kekovich also is a radio presenter on Melbourne Sports Radio Station, SEN 1116. He also appears on Triple Ms pre-match AFL coverage and is on pit (pardon the interruption) Australia on ESPN.

Kekovich's direct-to-camera TV monologues are done deadpan and use wide-ranging cultural references. They normally place in contrast many disparate or incongruous verbal images and ideas, ending with him saying his trademark, "You know it makes sense. I'm Sam Kekovich."


He has performed these 'rants' on commercials for North Melbourne FC membership drives, Dan Murphy's bottle shops, and, perhaps most famously, encouraging people to act less 'unAustralian' on Australia Day by eating lamb.

Sam Kekovich was the President of the Hammerheads, the Football Team created by Channel 7's show The Club and was the Chief Executive Officer of K Rock Radio in Geelong.

"Slammin'" Sam Kekovich is one of the real personalities of AFL football and is an engaging host and entertaining story teller.