A previous Hawthorn and West Coast Eagles champion, Sam Mitchell is available for speaking engagements for sporting clubs through to corporate clients where he delivers brilliant insights into his own career and what it takes to succeed at the highest level. 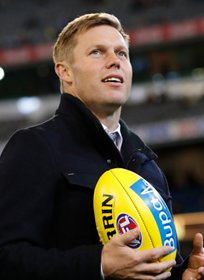 Sam Mitchell travels from VIC
Fee Range: Up to $5000

2015 Hawthorn Premiership player, Sam Mitchell is available for speaking engagements for sporting clubs through to corporate clients where he delivers insights into his own career and what it takes to succeed at the highest level.

An essential component of Hawthorn’s resurgence and a Premiership captain, Sam Mitchell is extending his career with the West Coast Eagles from 2017. Sam carries himself with maturity beyond his years in the formative seasons of his career. The dynamic midfielder finds the football with ease and has accumulated a raft of awards as a result.

A dual best and fairest winner at the Eastern Ranges, Mitchell was overlooked at the 2000 National Draft. A brilliant season as part of the Box Hill Hawks VFL Premiership in 2001 put recruiters on further notice of his ability, with Hawthorn selecting Mitchell with pick 36 at the 2001 National Draft.

Mitchell played nine AFL games in his debut season, still spending enough time in the VFL to record a remarkable win in the JJ Liston Trophy. In 2003, Mitchell stamped himself as a class player with victory in the NAB AFL Rising Star and back-to-back Most Determined awards at Hawthorn. Since then Mitchell has continued his consistently high output, dominating at the clearances and developing into a key leader of the young Hawks. This ascension culminated in his win in the Hawks’ 2006 Best and Fairest

Named the new captain of the Hawks for 2008 after a high Brownlow finish in 2007, Mitchell joined a select group to have led their club to a Premiership in their first year as skipper. He also collected The Age Player of The Year award. In a difficult 2009 for the Hawks, Mitchell was a shining light, winning his second Peter Crimmins Medal.

At the end of the 2010 season Mitchell handed the captaincy over to teammate Luke Hodge. Going from strength-to-strength, Mitchel l finished second in the Brownlow Medal in consecutive seasons in 2011-12 and made it four Peter Crimmins Medals – equalling club great Shane Crawford. Sam finished the 2014 year on a high with a huge win against the Sydney Swans to take out the Premiership once again.

The Brownlow Medallist left the Hawks in 2016 to head west, where he played 22 senior games for the Eagles before becoming an assistant coach in their 2018 premiership-winning season.

The former Hawthorn star returned to the hawks as an assistant coach for the 2019 season after signing a three-year deal.

Having reached well over the 200-game milestone, Mitchell is a regular on football’s major TV and radio programs, where his sophisticated but relaxed personality is on display and an accomplished public speaker and at ease as a keynote presenter.

What it takes to succeed at the highest level

The importance of teamwork