Popular media personality Samantha Armytage is a journalist with 23 years experience.   Sam anchored Australia's top rating breakfast show 'Sunrise' for 8 years.   Prior to that she co-hosted Weekend Sunrise for 7 years and held numerous other news- reading and reporting roles for the Seven Network in the 18 years she worked there. 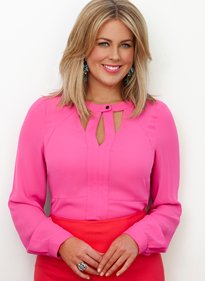 Samantha Armytage did a fantastic job, she worked extremely well with Mark Beretta and their synergy was immediately evident. She was nothing short of pleasant. Constantly mingling with guests and nothing was too much effort.
Tim, Star City

Prior to that she co-hosted Weekend Sunrise for 7 years and held numerous other news- reading and reporting roles for the Seven Network in the 18 years she worked there.

Earlier in her career, she was the Chief Political Correspondent for Sky News in the Canberra Press Gallery (2002/03.)

Sam has a wealth of television experience, having covered some of the big, breaking news stories of the past few decades.

Including the Canberra Bushfires, Victoria's 'Black Saturday', Brisbane's floods, the trials of the Bali 9 and Schapelle Corby in Bali. She's reported from the East Timor conflict, the Cronulla riots and Christchurch Mosque massacre, as well as the Greymouth (NZ) mine disaster (for which she and her team won the 'Best News Coverage' Logie Award.)

Sam was one of the first Australian journalists to arrive in Paris following the terror attacks there.

Sam's sparred with Danny Green, swung from helicopters over crocodile infested swamps in the NT, always loves a chat with Ed Sheran when he's in town and even managed to get a worldwide Top Gun 2- scoop from Tom Cruise.

Somehow she came fourth on 'Dancing with the Stars' (2011) despite having no interest in or talent for dancing.

In 2014, Sam authored the best-selling book 'Shine' (Hachette) which was all about female empowerment.

Samantha is a regular columnist for News Corp's 'Stellar' magazine.  She now hosts its hugely successful weekly podcast; 'Something to Talk About with Samantha Armytage', where she interviews people from all walks of life.

Down to earth and respected, Sam is a natural communicator and a wonderful and warm Speaker, Host and Master of Ceremonies in the corporate arena.

She graduated from Charles Sturt University, Bathurst in 1998, with a major in Broadcast Journalism & minors in American Politics and Marketing.

Sam is a passionate supporter of rural and regional Australia and is an ambassador for 'Soldier On' and the 'Sony Foundation'.

She is married and lives in country NSW with her husband.