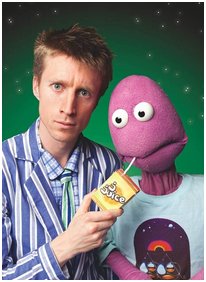 Testimonials for Sammy J and Randy


In 2010 Sammy J and Randy won Australia’s most coveted comedy award, The Barry for their one-man/one-puppet show, Sammy J and Randy in Ricketts Lane. In 2011 they wowed Australian audiences with their second instalment Sammy J and Randy in Bin Night.
Combining catchy songs with chaotic tomfoolery and outbursts of filth, these two adorable characters have an uncanny knack of charming the pants off everyone they meet.

Sammy J and Randy’s first collaboration was the stunning Sammy J in the Forest of Dreams. The show won them The Age Critics’ Award at the 2008 Melbourne Comedy Festival and went on to sell out seasons across Australia and the UK.

If you haven’t yet fallen for the skinny guy and his purple puppet buddy – now is the time!
Subscribe
© 2022 Platinum Speakers