Print
Sarah Wilson has a fantastic story with tried and proven insights into health and well-being. A career that has spanned many years combining her passion, experience and natural ability, Sarah provides intelligent and stimulating insights as a guest speaker but also makes for an idol host or MC. 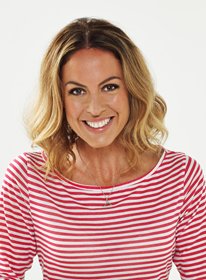 “Ogilvy Public Relations Australia is the largest PR consultancy in Australia. In July 2011, we hosted an event in Melbourne which focused on the future of the communication industry over the next 10 years and our panelists included an academic and very senior private and public sector leaders in communication from both Australia and overseas. Sarah was the moderator/MC and did a truly outstanding job. She took the time to REALLY understand the discussion topics, the hot buttons of the panelists, their differing styles and confidence levels. She masterfully managed a great event. Her natural style lends itself to this type of work. Sarah is a real pro and a delight to work with.”
Kieran Moore, CEO, Ogilvy Public Relations Australia.

“Sarah Wilson is vibrant. She talks like she means and knows it. Such engaging smarts is a rarity!”
Bill Tikos, CEO TheCoolHunter.

“In what is a complexly layered media environment today, Sarah Wilson identifies and communicates insights into the young women's market that can save marketers time and budget. There is a plethora of media vehicles available today. What we want is the connection with female consumers that translates into meaningful business. Wilson takes that young women's market, explains the blurring of media messages, and gives intelligent insights as to how these women receive and process messages, and importantly, make choices. Informative, entertaining and highly qualified in this arena, Wilson is a great reference for anyone wanting to understand and communicate effectively with young women today.”
Janet Muggivan, Corporate Communications Director-Asia/Pacific, Revlon

Sarah Wilson has a fantastic story with tried and proven insights into health and well-being. A career that has spanned many years combining her passion, experience and natural ability, Sarah provides intelligent and stimulating insights as a guest speaker but also makes for an idol host or MC.

Sarah's a
n Australian media personality, journalist and blogger with an integrated voice across television, radio, magazines, newspapers and online. She's the former editor of Cosmopolitan magazine and was the host of the first series of MasterChef Australia, the highest rating show in Australian TV history. She's now the host and program developer for the country's newest channel Lifestyle YOU, writes a weekly column for Sunday Life magazine about how to have a better life and is a regular guest on Channel 7's Sunrise.

In more recent times Sarah has become a prominent blogger at SarahWilson.com.au and in 2011 launched a best-selling eBook on quitting sugar which has helped over 20,000 people.

Food, nutrition & wellness:
I'm a qualified health coach with New York's Institute of Integrative Nutrition and I've healed my own crippling illness through food and exercise. I'm also about to publish my first ebook 'How to Quit Sugar' and my new TV show Eat Yourself Sexy screens on Lifestyle in August. My theories are very fresh (many are only just starting to be understood in Australia) and all about streamlining; I'm anti-diet and anti-extreme exercise: "The top 20 tips and tricks to live well now"; "I ate myself better: what I learned on my journey back from collapse" and "How to quit sugar".

How we want to live now:
The best wellness, productivity and simple living advice from more than 100 Sunday Life column explorations and hundreds of blog experiments, including the personal lessons learned from meeting the Dalai Lama, Edward de Bono, Sir Richard Branson and many more.

Media & writing:
I've worked for every media outlet - TV, newspapers and magazines - in Australia. I know traditional and new media intimately and have perspectives on the new landscape - because I'm straddling it! "Why we all have to be 'media whores'"
Subscribe
© 2022 Platinum Speakers