Print
Shane’s career has bloomed over the years after kick starting it with the overwhelming success of the movie ‘Kenny’. Shane is a much respected Australian actor however where he can he loves to share his story on the corporate stage as an inspirational keynote speaker and master of ceremonies. 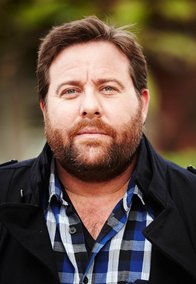 “Thank you once again for presenting at our Making Connections Lunch. Your drive, enthusiasm and success is an inspiration to us all. Our objective for this series of lunches is to provide a relaxed environment for staff and clients to interact, while drawing inspiration from an interesting and thought-provoking presenter. Shane you have helped us achieve this aim and for that we are very grateful”

“Shane was fantastic on the night! We thought he was great at injecting his individuality in to the night's proceedings and had the audience in stitches with his adlib stories and jokes.  We have had loads of comments from the dinner attendees - including Comcare Executive who have said that they thought Shane was absolutely brilliant. He was very easy going and a pleasure to deal with.  We would love to have him back again and would definitely recommend him to anyone!”

“TOTALLY STUPENDOUSLY WONDERFUL!!!! Shane is absolutely professional, amusing, honest, caring, it's obvious he enjoys what he does and his life.  He is brilliant and I think I'm in love!!!! We would use him again in a flash - what a presenter and what a great human being.  Shane rated well above any of our other speakers and deservedly so.  I can't speak highly enough of what a true professional he is and his honesty is so apparent.”

"Shane was fantastic! Great sense of humor, humorus and yet professional. We experienced slight AV technical difficulties and he held it together very well. With his background in event management, he was able to engaged with the guests and keep everything rolling and on track. Everyone said they loved him and if we could bring him back the following year."

"He was fantastic. I have never seen Shane MC anything before so it was pure delight for me to see him in his element and do such a fine job. He wasn’t just an MC, he was entertaining, and that I think is the thing that sets him apart from the pack. I don't know how we can find someone better for next year!"

Shane Jacobson is one of Australia’s most loved, award-winning actors, presenters and entertainers, and has worked with some of the biggest names in radio, film, stage and television for more than 25 years.

Performing has always been an important part of Shane’s life. It all began in amateur theatre at the age of 10 and he hasn’t stopped since. His quick wit and gift for characterisation cemented his early success, with gigs in stand-up comedy, as a TV audience “warm-up guy” and as radio character “Sergio” leading on to an impressive list of appearances in music videos, TV commercials and short films.

But it was his role as the character Kenny Smyth in 2006 that brought him wide recognition both at home and internationally. Shane won a string of awards for Kenny, including the prestigious AFI Award for Best Actor and, together with his brother and director CLAYTON JACOBSON, the 2006 IF Awards for Best Feature Film and Best Script and the Film Critics Circle of Australia Award for Best Original Screenplay. Kenny wasn’t just a critical success – it grossed almost $8 million at the Australian box office, making it the highest grossing Australian film in three years, and also became the highest selling Australian DVD release ever.

Shane’s stage career has been just as successful. The role of ‘Nicely Nicely’ in the 2008 revival of the musical Guys and Dolls with LISA McCUNE, IAN STENLAKE, MARINA PRIOR, GARRY McDONALD and MAGDA SZUBANSKI, earned Shane a Helpmann Award for Best Male in a Supporting Role, and he's entertained thousands of theatre goers with roles in The Drowsy Chaperone (2010) with GEOFFREY RUSH, ROBYN NEVIN and RHONDA BURCHMORE, QI Live (2011) with STEPHEN FRY, 8 The Play (2012) with RACHEL GRIFFITHS, Shane Warne – The Musical (2013) with EDDIE PERFECT and LISA McCUNE, and Mother & Son (2014) with NOELINE BROWN and DARREN GILSHENAN.

Shane can, and does, turn his hand to just about anything. As an author he has penned automotive pieces for Drive and his 2014 autobiography The Long Road to Overnight Success became an instant hit and number 1 bestseller. As a producer he’s brought shows like Rock Soldiers (2011) and Hangin’ with Hoges (2014) to the screen. He’s been seen hosting events and programs like the Australian Motoring Festival, Top Gear Live, Friday Night Crack Up, The Living Room and Manspace, for which he is also the Executive Producer. As a singer he’s a regular guest at the annual Carols by Candlelight and fronted 2015’s sellout show A Night Out with Shane Jacobson and The Melbourne Ska Orchestra.

Amongst this incredible body of work Shane has always found time for people and causes close to his heart. He is, or has been, the patron or ambassador for HeartKids Australia, Scouts Victoria, Indian Motorcycles, Docklands Film Studios, Polaris Offroad Vehicles, Australian Side by Side Racing Championships, HMAS Canberra, Get Reading, Entertainment Assist, The Mirabel Foundation, Variety and Parkinson’s Victoria.