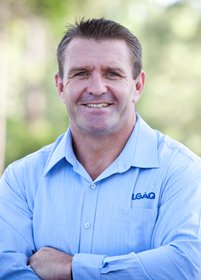 At Queensland Rail we were looking for the next step in our cultural safety journey and Shane Webcke was an integral part in that journey. Shane shared his story with our Network workers, which resinated with all of them. Shane made a lasting impression on our workforce. Six months on, our workers are still talking about Shane’s message and what their motivation to stay safe at work is. Coordinating our Tackling Health and Safety Program with Shane was an easy experience. Shane was happy to work with our business, travelling to many of the regional depots across the state and multiple South East Queensland locations. Shane was happy to work around our rosters which included speaking early mornings and late nights.

We were lucky enough to have Shane Webcke speak at our annual staff meeting in 2016 and he received one of the highest audience satisfaction ratings of any speaker we’ve had over the past 10 years. Shane has a high energy delivery style and a message that connected with our entire team. This was no mean feat given we have such a broad mix of white collar, blue collar, male and female staff. After his presentation, Shane also spent time chatting with the audience more informally which was extremely well received. Thanks again Shane for helping make our staff meeting so successful.

At the Toowoomba Regional Council, we know that the health and safety of our workplace is our number one priority. During Safe Work Month, we sought a speaker who could communicate our work safe values, deliver a compelling address and connect with our staff. Shane Webcke not only shared his own personal experiences as a professional sportsman, farmer and father but also how Workplace Health and Safety directly affected him, his family and his passion for safe work practices. Shane highlighted the journey he has undertaken to become a Safety Ambassador for Queensland and delivered his address to provoke positive change within our organisation. Shane is able to engage varied audiences with his first-hand story of how a workplace accident has impacted his life and has re-invigorated our team to work safely for the moments that matter.

Acknowledged for his outstanding career in Rugby League, Shane Webcke is an author, speaker and media personality. Shane is also heavily involved in Community Initiatives and is a great role model and professional speaker.

Shane Webcke is the consummate team man. The Broncos leading big man who started his football career playing under 8’s as a five-year-old at Clifton, and finished it as arguably Rugby League’s leading prop forwards. Webcke went on to play 24 times for Queensland. He also played 26 Tests for Australia and during his career became the No.1 prop of his era and is regarded as one of the best of all time in his position. In 2008, the Centenary of Rugby League, But his greatest contribution to rugby league was as a stalwart for his beloved Brisbane Broncos. In a career spanning 12 seasons, he played 263 first grade matches, was a member of four premiership teams and captained the club on 10 occasions. He also won the prestigious Paul Morgan Medal as Player of the Year on two occasions the Daly M Prop of the year three times and has been awarded life membership of the Broncos.

Now retired, his autobiography is titled “Warhorse” (nickname), Shane Webcke has the country roots and love of the land that often produces the hardest sportsmen. He has always been a tough competitor as a player and assistant coach at his beloved club, the Brisbane Broncos.

Shane’s taken what he’s learned about commitment and work ethic from the farm as a young fella to the football field as a player and back to farming in regional Queensland. From there, he balances family life with his wife and three children with his other job in Brisbane, behind the news desk at Seven.

In 1994, when Shane was just 18 years old, his father was killed in a Queensland workplace incident. Shane had only just started his football career under the guidance of Wayne Bennett when he received the news that his world had changed forever. His direct experience with the horrific outcome of his father’s workplace fatality, has led him to the role as a safety ambassador. He shares the story of his father in the hope it will motivate others to put safety first, always.

Shane shares his knowledge, passion and experience with many audiences across Queensland and Australia as a keynote speaker, guest speaker, MC, panellist and host.

Shane is available for breakfast events, luncheons, dinner events, seminars and conferences. delivering a tailored message for audiences or a series of events rolled out across the country.