Print
Perth Wildcats captain Shawn Redhage grew up in Nebraska USA and is now a naturalised Australian professional basketball player. He currently plays for Perth Wildcats in the Australian National Basketball League and has been captain of the team... 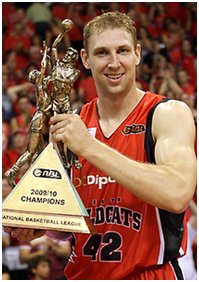 Shawn Redhage travels from WA
Fee Range: Up to $5000


In the United States, Shawn received the Nebraska Player of the Year Award in 1998/99 after a stunning senior year with Nebraska State High School. After high school, Shawn began studying and playing for Arizona State University and helped lead the team to their 4th NCAA tournament appearance in the last 30 years and graduated with honors in Construction Management.
Shawn Redhage became a professional basketball player in 2004 when he moved to Australia and played in the SEABL for the NW Tasmania Thunder. He was instrumental in SEABL’s championship and was awarded MVP (Most Valuable Player) honours in the League and Club.
He began his NBL career in September 2004 with the New Zealand Breakers but was released mid-season after playing only 13 games, when the Breakers decided to sign veteran import Marcus Timmons. Shawn returned to SEABL to play for Bendigo Braves after his departure from the Breakers. In his time with the Braves he led them to the National Championship while claiming his second league MVP award averaging a league best average of 35 points per game.
Shawn joined the Perth Wildcats in 2005, where he instantly made an impact and earned the nickname of The Scoring Machine on his way to finishing second for the league MVP award. He eventually won the Gordon Ellis Medal (Wildcats MVP) for that season, and went on to win a club record of six straight MVP awards.In the 2007-08 NBL season Shawn was in the top 10 rebounds, top 20 blocks, top 5 points per game averaging 22.4 top 20 foul shot percentage.
After the 2008 NBL season, Shawn competed in the Peurto Rican Baloncesto Superior Nacional (BSN) for the Crillos de Caguas. In 2008 Shawn became an Australian citizen and also an Australian Olympian when he played in the Australian men’s basketball team (Boomers) at Beijing Olympics. In 2009 Shawn was named Captain of the Perth Wildcats and helped lead the team to their first championship in ten years.
On 23rd January 2011, in the middle of one of his finest seasons as a professional athlete Shawn fell and dislocated and fractured his hip during a Wildcat’s game against Adelaide 36ers. Doctors told Shawn his career was over as no professional basketball player had ever returned to the court after such a devastating injury.
However, Shawn was not about to give up. After two surgeries and over 30 days spent in hospital Shawn miraculously recovered and made an amazing return to the court after just seven months. In Shawn’s first official game for the Wildcats after his injury he led the team with 26 points including a career high 6 three pointer on the very same court where he was injured the previous season. He is currently helping the team seek their record 6th championship in the rich history of the Club.
Shawn is also completing an MBA and works as a financial planner at Savanna Pride Financial Planning in Perth (Subiaco).
Shawn is a much sought after speaker who is articulate, inspiring and entertaining. His achievements, strength, determination to succeed and ability to overcome obstacles ensure Shawn is well received by audiences at any level.

FALLING FORWARD – How adversity and setbacks can be the fuel that leads to future success.
LEADING FROM WITHIN – How leadership principles used at Perth Wildcats have taken them from a good team and made them into a champion team