Shelley Ware is a proud Yankunyjatjara and Wirangu woman from Adelaide, South Australia, who currently lives in Melbourne and well known as part of the ground breaking SBS football program Marngrook and most recently for joining the AFL.com webshow Colour of Your Jumper, as a special guest. 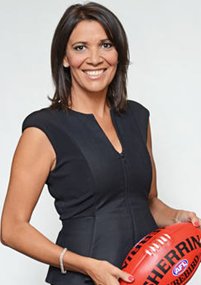 The Long Walk were honoured to have Shelley Ware as our MC for the 2015 Long Walk Women’s Lunch at the Atrium, Flemington. As one of TLW’s Indigenous Facilitators and a true supporter of the holistic work of the TLW , it was a pleasure to have Shelley along for the ride. In the lead up to the event Shelley was so easy to work with. Shelley was very flexible in her time and also quite understanding of the perplexities in pulling together an event of this size (over 700 in attendance). I found Shelley to be respectful, approachable and showed a genuine interest in the key note speakers, guest, sponsors and the like.

For the past three years Shelley Ware has been a fabulous ambassador for the Jean Hailes Women’s Health Week. Despite being a busy woman, juggling her teaching role, TV work, family and a great commitment to the Aboriginal and Torres Strait Islander community, Shelley found time in her full schedule to give to Jean Hailes. Women’s Health Week is dedicated to all women across Australia to make good health a priority and Shelley is passionate about this. She has supported Jean Hailes by filming promotional videos, attending launch events and promoting the week on Marngrook Footy Show.  Shelley is a fantastic woman to work with, she embodies the spirit of our organisation and Jean Hailes is proud to have her as an ambassador.

Shelley Ware travels from VIC
Fee Range: Up to $5000

Shelley Ware is a proud Yankunyjatjara and Wirangu woman from Adelaide, South Australia, who currently lives in Melbourne and well known as part of the ground breaking SBS football program Marngrook and most recently for joining the AFL.com webshow Colour of Your Jumper, as a special guest.

For the past decade or so, Shelley has worked in the media as a radio and television presenter on both local and national AFL football news shows. During that time, particularly as a member of NITV’s Marngrook Footy Show team, Shelley has become one of the most respected and recognised female presenters of AFL football in the country. Shelley’s role on The Marngrook Footy Show has her discussing and analysis AFL games. Her role on the AFL.com webshow Colour Of Your Jumper, sees Shelley host the webshow where she leads discussions about topics of the week throughout the AFL.

Shelley was also named the 2019 Fujitsu General Football Woman of the Year.

Shelley has 25 years experience as a primary school teacher as a reading specialist, art teacher and a classroom teacher. Now she works part-time as an Aboriginal Education Officer at Parade College in Bundoora and Preston.

Shelley is also a regular Master of Ceremonies, keynote presenter to corporations and events, espousing her personal journey, perspective on females in sport, Aboriginal issues, and also childhood education.

Diversity in the workplace