Print
Simon Bryan is the Executive Chef at The Hilton running a large commercial kitchen serving a number of restaurants.He left school to become an apprentice mechanic, specialised in motor bikes, before going on to University where he... 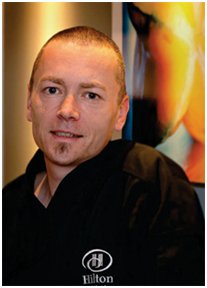 Simon Bryan is the Executive Chef at The Hilton running a large commercial kitchen serving a number of restaurants.


He left school to become an apprentice mechanic, specialised in motor bikes, before going on to University where he took a job in the Uni café to support his studies. He discovered that he liked this more than the lectures.
He says a recipe is nothing; technique is everything, and when things go wrong you have to be able to wing it.
He began his cooking career in several Thai and Indian Restaurants in Melbourne, before moving to Adelaide in 1995. Simon has been with Hilton Adelaide for more than 10 years, commencing as a Commis Chef, followed by 18 months as a Chef de Partie in The Grange with Cheong Liew and rapidly working his way up to Senior Sous Chef of The Brasserie. It is in The Brasserie where Simon has emerged as one of Adelaide’s hottest young chefs and was promoted to Executive Chef overseeing 33 staff, 2 of the states leading restaurants, a quick service deli, and as South Australia’s largest hotel, the largest catering and room service operations in the state.
Simon’s television career started in 2004 with appearances on the ABC series Beat the Chef . It was here he was discovered and offered the co-host role on the now hit series on ABC1 The Cook and the Chef with local food icon Maggie Beer. Having just celebrated 100 episodes of the Cook and the Chef, another series will be filmed in 2009.
Subscribe
© 2022 Platinum Speakers