One of cricket’s greatest all-rounders, Sir Ian Botham ‘Beefy’ racked up 14 Test centuries and 383 wickets. He is an internationally recognised personality.  Ian is now a Sky commentator, an inspiring fundraiser and an obsessive angler. 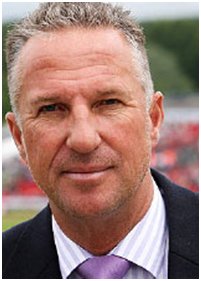 One of cricket’s greatest all-rounders, Sir Ian Botham ‘Beefy’ racked up 14 Test centuries and 383 wickets. He is an internationally recognised personality.  Ian is now a Sky commentator, an inspiring fundraiser and an obsessive angler.

A true cricketing hero, Ian draws on his experiences as a professional sportsman to demonstrate how teamwork and leadership can lead to success.

His up front presentations and lust for life, ensure that audiences are left truly entertained.

He is remembered as the best all rounder that English cricket has ever seen. Since his retirement from competitive cricket, he has continued his involvement in the game through the role of cricket commentator for Sky Sports, as well as developing his keen interest in golf on the Pro-Am Circuit.

He was awarded the OBE for his services to cricket and charity in 1992 and a knighthood in 2007. Ian also writes a column for the Daily Mirror.

Ian Botham is the best all-rounder England has ever produced. He holds the world record of 1000 runs and 100 wickets in just 21 tests, and he remains the greatest wicket taker in 115 years of English test cricket.

Away from the crease, Botham has played professional football (for Scunthorpe), and raised millions for Leukaemia Research. Since his retirement, he has commentated for Sky Sports and developed a keen interest in the Pro-Am golf circuit.

Ian Botham has also written a novel, Deep Cover, and the autobiographical Don’t Tell Kath - which became the most successful sports memoir in publishing history. He was awarded an OBE and then knighted for his services to cricket and charity, walking thousands of miles in a series of sponsored walks. He also has the rare distinction of being voted Sports Personality and Pipe Smoker of the Year.

Ian is a fantastically entertaining speaker, whose brash style and charisma fills the room like his presence used to fill pavilions all over the cricketing world.