Sofie Formica is widely recognised from her success in global television markets over the last 25 years. Sofie is a natural presenter and emcee who is highly regarded for her professional, creative, and easy-going personality. 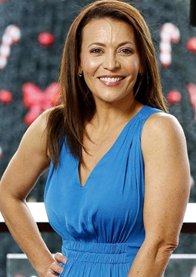 Sofie was FANTASTIC!!! Perfect for our event, fabulous response from the local brisbane audience and an absolute delight to work with... wouldn't hesitate to re-book her or recommend in the future.

I have used Sofie Formica several times as an MC and have been absolutely delighted with the results at all times. A true professional she commands the attention of the room, tailors her style to the specific event and brings warmth, an engaging likeable energy, discipline and polish to all kinds of events.

Sofie Formica is widely recognised from her success in global television markets over the last 25 years. With an impressive television career that began as a 14 year-old, Sofie soon became a prominent face on the Seven Network thanks to hosting children’s programmes ‘Wombat’ and ‘Saturday Disney’, followed by a stint as Australia’s first female game show host on ‘Now You See It’.

A few years later, Sofie became a founding member of ‘The Great Outdoors’ team, regularly presented various televised network events, such as The Australian Fashion Awards and the People’s Choice Awards, and acted on popular soap ‘Home and Away’ and variety show ‘Tonight Live with Steve Vizard’.

In 1993, Sofie accepted a prime-time offer from the Nine Network to co-host ‘Just Kidding’ with Steve Jacobs, and it subsequently became Australia’s highest rating television show that year. Two years later, Sofie moved to America and her global profile continued to rise thanks to roles with:

NBC/Time Telepictures as a reporter on national US entertainment show, ‘Extra’, where she interviewed Hollywood celebrities including Bruce Willis, Meg Ryan, Nicole Kidman, the cast of Friends, and many more the world’s first multimedia converged TV, radio and internet show-, ‘The Web’, which was a magazine-style programme produced for the USA Cable Network. (In this role, Sofie was seen in more than 18 countries and led a co-hosting gig with Ron Reagan Jnr on nationally syndicated program ‘TV.com’)

Oprah Winfrey, who handpicked Sofie in 1999 to be her co-host and technology mentor in a 13-part series, ‘Oprah Goes Online’, for the Oxygen network.

Sofie returned to Australia with her husband and three children to raise their young family. During this time, Sofie took a hiatus from the media industry until 2006 when she became the host of the Seven Network’s Queensland lifestyle programme, ‘The Great South East’, and is now the longest running host. ‘The Great South East’ continues to be a ratings winner leading its timeslot every year.

Sofie is a natural presenter and emcee who is highly regarded for her professional, creative, and easy-going personality.