Print
A multi-award winning current affairs host, author and adventurer Stan is the International Affairs Analyst for the Australian Broadcasting Corporation, a multi-award winning current affairs host, an author and an adventurer. He is a member of the Wiradjuri and Kamilaroi Aboriginal people and it’s his Aboriginal heritage that’s shaped his dynamic, resilient personality. 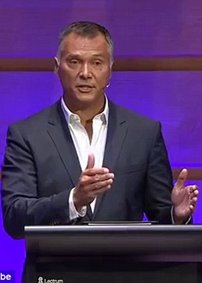 He was friendly, approachable and generous with his time and knowledge. He was challenging in a respectful way and gave people lots to consider.

All present were effected by his words. His warmth and passion about the subject was very powerful.

Please pass on our sincere thanks to Stan for the amazing night he gifted us with last evening. His grace, warmth, empathy and intellect all shone through, but it was his heart felt sharing of his story and care to convey his message and example to the many indigenous students who were there that was truly touching. The students loved the opportunity to meet him and we were so grateful that Stan gave so freely of his time. There was not a person in the room who didn’t feel privileged to share this very special, and intimate, event.

AMAZING.  Stan was the stand out speaker.  In sixteen years of running our event it was a highlight speech: visionary, empathic, engaging and just one in a million.

Stan was absolutely brilliant. He researched our situation, he rolled with the fact that our morning presenters did not show, he was insightful and articulate, and was connected to Albury. I cannot thank him enough for his work with us

A multi-award winning current affairs host, author and adventurer Stan is the International Affairs Analyst for the Australian Broadcasting Corporation, a multi-award winning current affairs host, an author and an adventurer. He is a member of the Wiradjuri and Kamilaroi Aboriginal people and it’s his Aboriginal heritage that’s shaped his dynamic, resilient personality.

Well known for having brought the former Prime Minister Malcolm Turnbull to tears when interviewed about Indigenous affairs on The Point, Stan's keynotes are insightful, engaging, always professional and at times, controversial.

Stan Grant's Aboriginal heritage has shaped his dynamic, resilient personality. Born in Griffith in south-west New South Wales, in 1963, Stan Grant's mother is from the Kamilaroi people and his father is of the Wiradjuri.

Stan spent most of his childhood on the road living in small towns and Aboriginal communities across outback NSW. His father was an itinerant saw-miller who worked when and where he could. Stan moved so often he attended 12 different schools before he was in his teens.

The early traveling gave Stan a love of adventure and stories. He grew up listening to the tales of his grandfather and uncles and aunts. Despite poverty and an early sporadic education the security of his family and the larger Aboriginal community gave him a strong platform for life.

After attending University, Stan won a cadetship with the Macquarie Radio Network, launching a career in journalism that has spanned more than 30 years and more than 70 countries. In that time Stan has travelled the world covering the major stories of our time from the release of Nelson Mandela, the troubles in Northern Island, the death of Princess Diana, war in Iraq, the second Palestinian intifada, the war on terror, the South Asia Tsunami, the Pakistan Earthquake and the rise of China.

Stan has won many major awards including an Australian T.V Logie, a Columbia University Du-Pont Award (the broadcast equivalent of the Pulitzer Prize), and the prestigious U.S Peabody Award. He is a four-time winner of the highly prized Asia TV Awards including reporter of the year.

Stan has written The Tears of Strangers and Talking To My Country (Harper Collins), and has published numerous articles and opinion pieces for The Sydney Morning Herald and The Australian.

Stan Grant is passionate about justice and humanity. His years of international reporting has given him a deep understanding of how the world works. He is deeply immersed in the politics and history of Asia and the Middle East. He can link the importance of leadership and the impact of history and above all believes in the power and resilience of people.

Stan is married to ABC Sports Broadcaster, Tracey Holmes and has four children. He lives in Sydney.