Print
Stephen Curry is a highly regarded MC and Host.   He was the Host of the 2018 AACTA (60th Anniversary event) & 2008 AFI (50th Anniversary event) Awards and has also presented numerous times at the AACTA/AFI Awards, the Logies, the ASTRA Awards and the IF Awards.    Stephen has also MC’d many events including the 2019 Better Business Awards in Melbourne & Sydney and 2018 National Good Food Guide Awards. 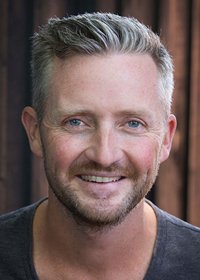 Stephen was phenomenal as an MC/ Comedian, he took the time to take on board the brief and connect with the audience to deliver an outstanding performance that kept the crowd entertained throughout the night. Stephens professionalism and ability to take a step back to understand the outcome we needed to make this event successful made him a cut above the rest. He made a huge impression with our audience and was a pleasure to work with

What a professional! Kept the crowd engaged and was a great fit!

Stephen Curry has established himself as one of Australia’s most talented character actors.

He became a household name with his breakout role in the much-loved classic Australian film The Castle, playing Dale Kerrigan.  Since then he has starred in many television series and feature films including most recently Lone Wolf and June Again (both films still to be released,) Hounds of Love (securing nominations for Best Actor in a feature film at both 2017 AACTA Awards and 2017 FCCA Awards). Other screen work includes Drunk History of Australia, True Stories with Hamish & Andy, Open Slather, Hiding, The Time of our Lives series 1 &2, It's a Date, Fat Tony & Co, Mr & Mrs Murder, Redfern Now, Rake, Cliffy, Save Your Legs, The Cup, Cloudstreet, Rogue, Thunderstruck, The Night we Called it a Day, Take Away, The Nugget, and The Wog Boy. Also, Wilfred, 30 Seconds, False Witness, The Informant, The Secret Life of Us, Changi, Frontline, Queen Kat, Carmel and St Jude, Day of the Roses, Mary Bryant, Good Guys, Bad Guys. He also starred in the short film You Better Watch Out with Chris Haywood and Dan Wyllie.

On stage Stephen has performed his solo show, Live, Intimate and Completely Unqualified at NoosaLIVE Festival 2018, as well as QI Live, The Writers (MIFC 2013) securing a 'Golden Gibbo' nomination, and with Shaun Micallef in the world-renowned sketches of Peter Cook/Dudley Moore in Good Evening (a live show performed at Sydney Opera House and Melbourne Comedy Festival, as well as seasons in Brisbane and Perth).  Other theatre includes Dinner and Fred (both for MTC).

He has also narrated various childrens shows for both the Western Australian Symphony Orchestra and Melbourne Symphony Orchestra.  Stephen is an Ambassador for the organisation Save the Children and MC’d their recent 70th Anniversary event in Perth.