Stephen Scheeler is the former Managing Director of Facebook in Australia and New Zealand, where he led Facebook’s unprecedented rise from quirky Silicon Valley start-up to media and technology titan. Stephen guided Facebook ANZ’s overall business – including Instagram, Messenger, Whatsapp and Oculus – through one of the most dynamic periods of growth and disruption in recent business history. 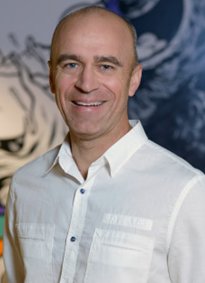 On behalf of the team at Bunning's who attended the recent Corporate Plan Update held at Werribee Mansion, Melbourne, I would like to thank you for the presentation on Digital Disruption in Retail Australia. The presentation was very well received and one of the highlights of the event. Some of the feedback provided by the team was "very insightful", "I have a better understanding of what is coming", and "It really opened by eyes to social and business implications" Our team are facing the challenge of better understanding the digital world and ensuring we position ourselves and the business to embrace it, you have inspired the team in both.

"We had nine speakers today and you were the highlight X10! Your keynote really got the room thinking and talking in a way that a room full of accountants and lawyers rarely do!"

"Your engaging personality and enthusiastic speech worked their magic to transform a usually silent audience of lawyers and accountants into an active and productive discussion about the future of the tax profession. Your insights and views brought up new perspectives from outside the ‘tax bubble' and greatly contributed to building the bridges between tax and other areas of business. Your opening address was not just a speech, it was a masterclass on how to bring an audience together, and I've personally learned enormously from you today. As a lecturer and as a member of the organising committee of The Future of the Tax Profession Symposium, my big thanks to you!"

"Stephen keynoted a recent PwC event on the future of work. Before an audience of over 100 HR professionals, he spoke about Silicon Valley culture and the lessons organisations can apply to their own teams and cultures. He was relaxed, eloquent, engaging and highly insightful, keeping the audience engaged for over an hour with just a seat and himself. Amazingly, he worked with no notes or slides – just great story telling! Feedback from the audience was overwhelmingly positive."

“Stephen presented a 20-minute keynote at a recent lunch for 200 members and guest of The Constant Investor. He spoke without notes, and without hesitation – authoritatively, eloquently and engagingly. Stephen brought the perfect mix of gravitas and light-touch humour. My audience loved it.”

Stephen Scheeler is the former Managing Director of Facebook in Australia and New Zealand, where he led Facebook’s unprecedented rise from quirky Silicon Valley start-up to media and technology titan.

Leading Facebook’s ANZ team – and working with Mark Zuckerberg, Sheryl Sandberg and Facebook’s Silicon Valley leaders – Stephen guided Facebook ANZ’s overall business – including Instagram, Messenger, Whatsapp and Oculus – through one of the most dynamic periods of growth and disruption in recent business history. His tenure at Facebook saw the ANZ business grow from mere start-up to over US$1billion in annual revenue – becoming one of the most successful Facebook markets in the world.

Stephen is a seasoned business leader, with a career spanning over 25 years across consumer products, retail, ecommerce, automotive, financial services, media and technology. He has served in senior executive roles at global leaders Westfield and Inchcape, and at Australian consumer products giant, Lion.

Today – as founder of global advisory The Digital CEO, Senior Advisor to McKinsey & Company, and Executive-in-Residence at Asia-Pacific’s leading business school, the Australian Graduate School of Management – he partners with the CEOs and boards of some of the world’s leading companies to help them build world-beating strategies, capabilities, culture and leadership. He has advised the leaders of Qantas, nab, Westpac, Macquarie Bank, IAG, Suncorp, Telstra, Wesfarmers, AMP, CUB, Brambles, Google, Seven West Media, MCN, QBE, JB Hi-Fi, Bunnings, Mirvac and the Australian Government.

As a speaker, Stephen has a unique ability to excite audiences on the power of technology, the future of business and the new paradigm of 21st-century leadership. He is an inspiring personality on the highest-profile stages, and is a member of Prime Minister Malcolm Turnbull’s Knowledge Nation 100, top innovation leaders in Australia.

Stephen is a high impact speaker on the highest profile media stages, with a knowledge base that any leader would wish to tap into.

Disruption: Digital disruption and its impacts on business, government and society

Amazon: Competing in the age of Amazon; what Amazon will mean for Australian business and consumers

Social Media: The rising power of social media in business and society

Marketing: The future of brands and marketing in a digital age

Data: The role of data and insights as a core competence of every company in the digital future

Culture: Silicon Valley culture and how to create it for your business

Leadership: Leadership in the digital age through better engagement with employees, customers & stakeholders

Innovation: How to build true innovation into the DNA of your business

Asia / China: The digital revolution in Asia and how Australian business can capitalize