Print
Legendary Indian cricketer Sunil Gavaskar was considered to be one of the all time best opening batsmen in the history of Test Cricket. Sunil is known for having set many batting records that lied unbroken for long years after some other batsman. 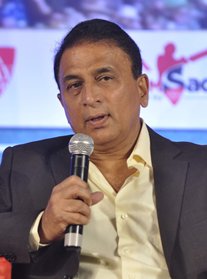 Legendary Indian cricketer Sunil Gavaskar was considered to be one of the all time best opening batsmen in the history of Test Cricket. Sunil is known for having set many batting records that lied unbroken for long years after some other batsman. He was the biggest Test scorer with the greatest number of centuries to his credit during his times. His record of scoring 34 Test centuries took 20 years to be broken when Sachin Tendulkar outclassed it in the year 2005.

Sunil Gavaskar metamorphosed Indian cricket in that watershed 1970-71 series. The 774 runs in four Tests that he scored in Caribbean in that debut series was a harbinger of 21-year-old’s precocity.

Gavaskar’s cataclysmic presence transformed Indian cricket off the field as well. When he came into the Indian team, players got Rs 750 a Test; by the time he moth-balled his kit, annual incomes of cricketers had more digits than phone numbers — well, almost. His commanding stature and authoritative voice laid the foundation for the players to cash in when the country witnessed the boom of satellite television. The millionaire cricketers of today have to thank him a lot.

He was a key figure in many of fourth innings epics in cricket history: 102 out of 406 for four in Port of Spain — then the highest ever by a team to win the Test; 90 out of 347 against Australia at Bangalore in Tied Test II, and 221 out of 429 for nine in a historic draw against England at the Oval in 1979.

He was the epitome of courage and consistency in the Golden Era of fast bowlers which had the likes of Dennis Lillee, Jeff Thomson, Andy Roberts, Michael Holding, Malcolm Marshall and Imran Khan testing the bats and bones of batsmen. The traditional struggle of India’s flat-track bullies on overseas soil against even bowlers of average quality should put Gavaskar’s worth in perspective. He did not have the freedom to bat aggressive, but when he did he scored a hundred off 94 balls against Malcolm Marshall and Michael Holding and an 85-ball century in a 1987 World Cup game against New Zealand.

He held the record for the most runs and hundreds in Test cricket and is the first of the two to score hundreds in each innings thrice.

The timing of his retirement was as mellifluous as the timing of his shots:  96 in his final Test innings on a beast of a wicket against Pakistan in 1986-87; an elusive century in his penultimate one-day innings; and 188 against a World XI in his final First-Class match at Lord’s, the grand occasion of MCC’s Bicentenary.

Gavaskar has donned many hats: Sheriff of Mumbai, Vice-president of the MCA, BCCI president, ICC match referee, Chairman of ICC cricket committee and TV commentator. He has also been an author, singer and an actor.