With over 30 years as an Economic Commentator, Terry McCrann shares his insights and knowledge on all things economic. Terry McCrann has the ability to explain complex financial and economic matters with clarity making him a great speaker and communicator. 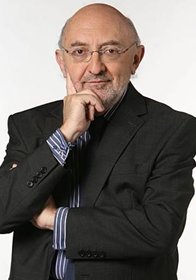 Good to have Terry put us right and give us an understanding of current situations.

Terry has a manner that explains national and global economic and political issues that all our clients could relate to. His objectivity and insightfulness were refreshing and targeted to the audience

For nearly three decades, Terry McCrann has been a media commentator of distinction.

He writes a daily column that is syndicated in the Herald-Sun, Sydney Telegraph-Mirror, Brisbane Courier Mail, Hobart Mercury and the Adelaide Advertiser.  McCrann's reach is testament to his knowledge of the business sector and his ability to convey that knowledge to his readers. McCrann is also a regular columnist for The Australian and frequently appears on television and radio. Communicating is second nature to him.

Terry McCrann is well known for his hard-hitting commentaries on business, the economy, rampaging entrepreneurs, and politicians. Will interest rates be cut? Will the dollar fall? Which companies are headed for troubled times? For more than 20 years Terry has provided critical analysis on these issues and a wide range of events and personalities that have shaped the nation. He's also been at the centre of many of the great controversies and debates that erupted during the Hawke-Keating years.

Terry McCrann has the ability to communicate exceptional well with his audiences. Knowing the subject is just one part of successful communication. Terry McCrann's enduring influence in the media is testament to his communication skill. But he has the knowledge to go with it. McCrann is a past winner of the Walkley Award for journalism, is a former Graham Perkin Journalist of the Year, and is a previous winner of the Melbourne Press Club's Golden Quill Award among many other awards and accolades.

Terry McCrann is a business speaker with few rivals.  His experience and expertise guarantee his success.