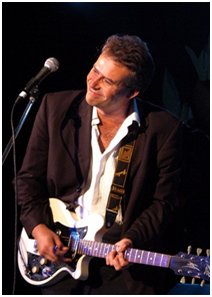 Testimonials for The John Field Band

After 20 years as a full time professional musician, John Field has now formed his ultimate band, “The John Field Band”.


This high octane, eight piece band includes the vocal talents of John Field and Bernadette Cogin; the dynamic three piece horn section of Dom Lindsay, Dan Fallon and Roy Ferin, Mark Rohanna on Piano and the most sensational rhythm section in the country -marvellous Matt Morrison on drums and doctor of philosophy bassman Chris Lupton. Rock and Roll, soul, blues, jazz and modern pop - they can and do play it all.
An original member of the rock group “The Cockroaches”, John Field has performed at over 4,000 gigs since 1980 and has written ten national top forty hits including the Cockroaches Platinum selling, APRA nominated first album. John has also written over 150 songs for the world famous children's group "The Wiggles" and won an APRA award for "Hot Potato".
The John Field Band lineup includes some of Sydney's most professional musicians. Between them, they have worked with jazz names such as James Morrison, Mel Torme, Johnny Johnson and Monica Trapaga. They have played with blues acts such as "The Hippos" and "The Bondi Cigars". On the other side of the coin, they've appeared in London's West End in "The Sound of Music" and the National production of "The Phantom of the Opera".
Equally at home at a corporate function, Christmas party’s, a wedding, or a hot and sweaty pub; whatever the function or occasion, the John Field Band will fit in with your plans. Come and have a night you'll never forget.
Subscribe
© 2022 Platinum Speakers