“The Ox and Marko”

The Ox and Marko’s unique style and natural, relaxed delivery combines wonderful sporting anecdote with jaw-dropping personal tales of adversity and emerging stronger than ever before. 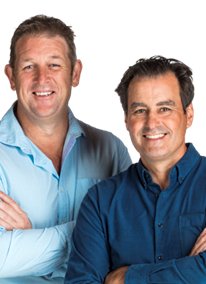 Testimonials for “The Ox and Marko”

“The Ox and Marko”'s Biography

An insight into overcoming personal adversity by two of Australia’s most engaging public speakers and ex-pro sportsmen.

The mental resilience and toughness required to keep coming back was learned from a young age after witnessing his father being murdered in front of him.

David also had a very public battle with a gambling addiction from the ages of 14-32. He’s now been clean for nearly 18 years.

A highly engaging public speaker, David’s honesty with himself has ensured he’s a respected voice in addiction and overcoming adversity. His story and learnings around teamwork, decision making, honesty and vulnerability are an inspiration for all.

Mark Allen played golf on Professional Tours around the world for over 15 years - including a memorable appearance at the 1999 British Open.

A gifted and highly respected radio personality, Mark has worked at 3AW, Macquarie Sports Radio and SEN. Teamed with his great mate “The Ox”, Mark has been delivering a unique brand of sports radio for well over a decade.

His journey is as entertaining as it is frightening, and is a must listen for those passionate about both Men’s and Women’s health.

The Ox and Marko’s unique style and natural, relaxed delivery combines wonderful sporting anecdote with jaw-dropping personal tales of adversity and emerging stronger than ever before.